Why Do You Scrape Wax Off a Snowboard?

There are many misconceptions about scraping snowboard wax and if it is effective. This guide will explain exactly why it is so essential to do it correctly.

The waxing process can be a tricky one to master. But once your wax has dried, it is time to scrape the wax off your snowboard. The reason you need to do this is to remove the excess wax that creates too much friction on your board, blocks water flow, and slows you down during your rides.

The idea of scraping is to remove excess wax that remains on the base. Wax will patch any creases or grooves on your snowboard ptex base to help make riding smoother and more efficient. This is why scraping the wax is so important, and this guide includes everything you need to know to get it done.

If you have ever used a snowboard with too much wax, you can understand why it is so important to properly scrape your snowboard. The excess wax can build up and cause problems for snowboarders during their runs. Continue reading to learn exactly why you need to scrape the wax off a snowboard. 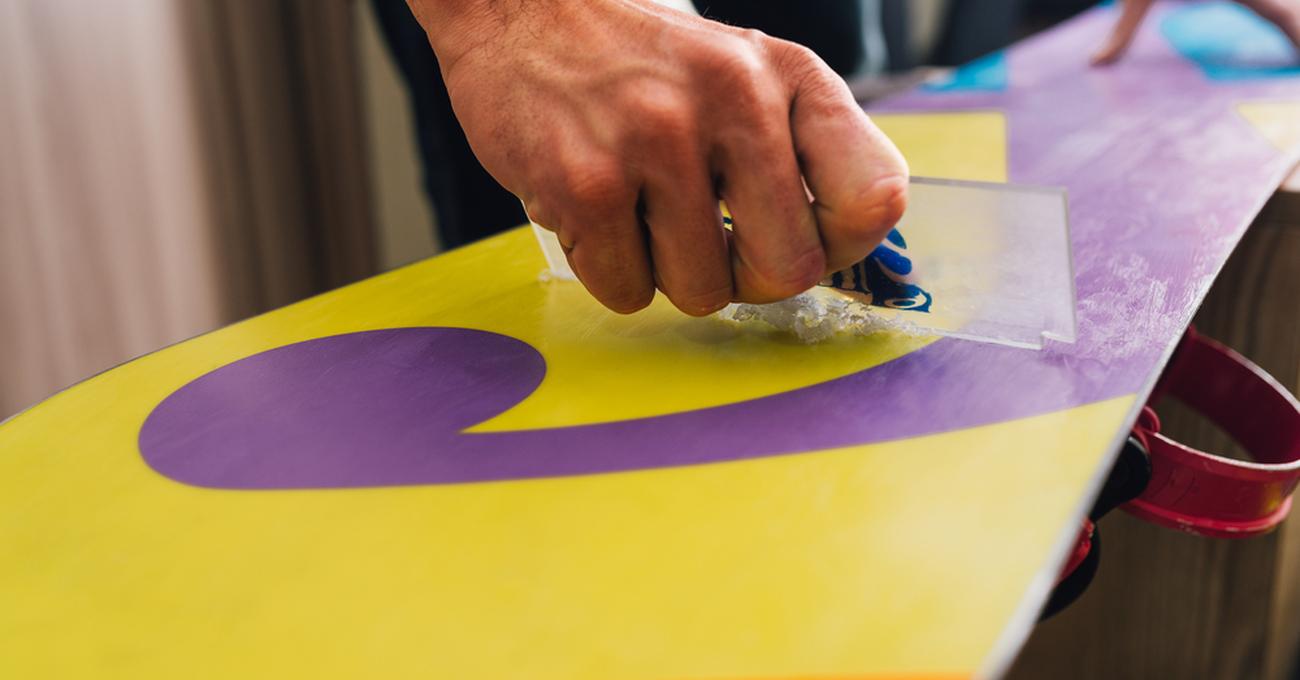 ‍Why Do You Scrape Wax Off A Snowboard?

Wax increases the base's lubricity, which means your board rides smoother on the snow. The brush removes excess wax, exposes the structure of the ski base, and allows a smoother run of your board.

The primary reason to scrape the wax off your snowboard is to remove excess remnants leftover on the base. If you go back and brush the scraped wax off the surface of the boards, you will see some spots that you may have missed.

Snowboards are designed to absorb wax, so after you finish applying the wax and allow it to dry anything left over was not properly absorbed by the ptex base. This means when you start to scrape the board, any wax that gets removed couldn’t be absorbed and needed to be removed from the base.

If you fail to scrape it and leave the hardened excess wax on your board, it will become extremely noticeable in the cold temperatures only after a few runs. The board creates too much friction with the snow, causing you to lose speed and smoothness.

The idea of wax on a snowboard is to increase friction, but only to a certain extent. The wax will fill in the grooves of the base pattern on the bottom of the board, allowing water to flow beneath the board to help with speed.

It is always best to wax your board, allow the wax to dry, and scrape off the excess wax for the perfect finish.

What Happens If You Don’t Scrape Wax Off Your Snowboard?

Regular waxing helps remove impurities from the base pores, slowing down the board. It is necessary to preserve your board long-term and keep it riding smoothly on snow in the cold weather.

Scraping wax ensures that the right amount of wax remains in the pores and the structure of the board to make it smoother and prevent the surface from becoming too rough. If you skip over the scraping step, the base of your board can never become as smooth as you want it to be.

If you decide not to scrape the wax off your board, it will eliminate the water flowing channels beneath your board when riding that you rely on for comfort and speed. It will be more difficult for your snowboard to glide too.

A snowboarder needs to scrape off all the wax on their board to get the best experience when they are riding. The natural feeling you have on a snowboard is impossible to get without scraping wax first.

How Long Do You Leave Wax On a Snowboard Before Scraping?

The amount of time you leave wax on a snowboard before scraping will depend on the temperature and the type of wax that you use. In general, you should aim to use quality wax and a consistent temperature to make the process as straightforward as possible.

To get the most from your snowboard, you need to make sure it is waxed properly. The easiest way to do this is by using a waxing iron and then scraping the excess wax off. You must leave the wax on there for a minimum of 20-30 minutes before starting to scrape it off.

A snowboarder needs to scrape off all the wax on their snowboard to get the best experience of snowboarding. Once you master the waxing process, it becomes much easier to maintain your snowboard every year.

How To Know If Your Snowboard Still Has Too Much Wax?

Wax is applied to the snowboard to help it glide across the snow. If there is too much wax on your board, it will be less likely to respond the way you want and you will have less control over your movements.

The easiest way to tell if your snowboard still has too much wax after scraping it is by the feel and the way the base looks. For example, the edges should be sharp so if you notice they are too dry or dull then you should scrape some more off.

You can also tell by how to snowboard rides. It is most obvious in how fast the board can move and the general feel it has on the snow. It will have a dry feeling while riding and provide much less responsive movements than you are accustomed to.

Can You Scrape Too Much Wax Off a Snowboard?

Scraping off the excess wax is an important part of snowboard maintenance. Snowboards need to be scraped off regularly, and the amount of time between scrapes varies on your riding frequency, temperature, humidity, and snow conditions.

When scraping wax off your snowboard, the goal is to leave the thinnest layer possible on the base surface. You should scrape along the edges from the nose to the tail and try to remove as much wax as you can.

It is extremely difficult and almost impossible to scrape too much wax off a snowboard, especially if you used a plastic tool to do it. Because of this, you should not worry about scraping too much wax off.

However, it is possible to leave too much wax on the board. This can present a much bigger problem and should be treated as the primary concern.

How To Scrape Wax Off a Snowboard

Scraping wax off a snowboard is a tedious process. It can be time-consuming and requires a few important tools and focus to execute properly. You can easily make a mistake if the steps are not followed correctly too.

The first step is to wax the snowboard. Once you get the hang of it, you'll find that it's not too hard to do with just a few basic supplies and some time spent learning how to do it. After you finish applying the wax, you can move on and get ready to scrape.

Before touching the wax, allow 20-30 minutes for the wax to sit on the board and dry. It is essential to allow the wax to dry because it forms a shape around your board and will cover up impurities on the base and fill the grooves.

3. Use Scraper To Remove Wax

Next, once the wax has been applied and fully dried you can get out your scraper tool and prepare to scrape. It is best to work your way across the board slowly from the nose to the tail. Put a focus on getting the edges and be as thorough as possible to be sure you don’t miss any critical areas.

Once you have finished, it is smart to go along the edges again with the scraper tool. The edges are the most important and the most difficult part to scrape so you should always spend some extra time on them to make sure they have been done correctly.

The last step involves brushing your snowboard after you finish scraping off the excess wax. Brushes usually come in any scraping kit and it only takes a few minutes as the finishing touches to get your snowboard ready for use again.

Why Do You Scrape Wax Off a Snowboard?