Why Do Archers Let The Bow Drop?

You might have noticed that archers drop their bows when they shoot targets. Why would they do this? How does this technique make it easier to shoot well?

Dropping or swinging the bow is a technique used by all expert archers, necessary for accurate shooting. No one would compete in the Olympics without shooting in this way. Even much less skilled archers usually let their bows drop after they fire.

Archers drop their bows when they shoot because they are not gripping their bows firmly. If you hold onto the grip, that will make your arm too tense and ruin your aim. Archers hold the bow between their thumb and forefinger but do not grasp it.

When you hold a bow, your instincts will tell you to grip it tightly. Since you are concentrating, you will want to hold onto the bow. Overcome this instinct to improve your accuracy.

How to hold a bow in place without gripping it

Hold the bow between your thumb and your forefinger. Don't think that you need to grip the bow to aim. You can adjust your aim without holding the grip.

Why is gripping a bow bad?

When you fire the bow, the tension in your arm will interfere with aiming, even if you are an expert. If you grip the bow, you will always create tension, and tension will hurt your aim. Even if your hand is not obviously shaking, the tension can still hurt your accuracy.

When you are shooting at targets that are a long way away, a small nudge in any direction can make you miss. If your hand moves an inch to one side, the arrow will be off by several feet at a target far enough away.

Even much tinier movements can make an archer do less well and lose a competition. Gripping the bow can create tiny movements even if your hand seems to be steady.

Does dropping the bow interfere with firing rapidly?

Yes, but this doesn't matter in most archery. Usually, archers have time to fire carefully aimed shots at distant targets.

Sometimes, competitors have to fire quickly in competitive archery. An archer might have to hit a few targets that are only ten yards away or less in a short time. In that case, dropping the bow is not a good idea, as it will slow them down too much.

Can you damage a bow if you drop it on the ground?

Yes, which is why you are always supposed to wear wrist straps if you use this technique. Archers always tie their bows to their wrists with straps. If you are not using a wrist strap, hold onto the bow.

Compound bows are not allowed in the Olympics, so this is not relevant to the highest competition levels. However, archers at many smaller competitions are permitted to use compound bows.

There is no point in dropping a compound bow because a compound bow does not put nearly as much tension on your arm. With a regular bow, the tension is highest when the bow is fully pulled back.

Did archers drop their bows in ancient and medieval wars?

Probably not, although no one knows for sure. Archers did not usually take careful aim at a specific target.

Instead, they would try to fire quickly, at a long distance, and into groups of enemy soldiers rather than at individuals. Dropping the bow would not be an advantage for that kind of shooting.

What if my bow does not come with a wrist strap?

You can buy a wrist strap or sling separately. You should buy a sling right from the start of your training. Otherwise, you will learn to shoot the wrong way.

Finger slings keep the bow closer to your hand and are cheaper than wrist slings. However, finger slings can be uncomfortable for some shooters.

Other people find wrist slings uncomfortable because they leave the bow hanging after they shoot instead of keeping the bow close to the hand. Since both types of slings work perfectly well, use the type that feels better for you.

Should you grip a comppound bow tightly?

No, even with a compound bow, a loose grip is best. Hunters usually know better than to go with a tight, white-knuckle grip when shooting. With a compound bow, you should actually hold onto the grip - but loosely, as you could nudge the bow in the wrong direction otherwise.

Yes, your accuracy will suffer if you are firing a bow that is too difficult to pull back. If your draw length is too long, this will also hurt your aim.

If your draw weight is too high, your arm will get shaky when you pull the bow back. You will have to aim the arrow up on an angle to pull the bow back all the way if the draw length is too long. You will end up shooting arrows too high and missing the target.

If you find yourself leaning back when you shoot, this is because your bow's draw length is too long. Remember that being off by less than an inch when you fire the arrow can throw the arrow off by more than a foot at the target. Do everything necessary to make it so that you can shoot straight.

Even at the Olympics, some archers can badly mess up their shots by not being calm enough when they shoot. When you shoot, be calm and don't flinch - stress can cause a small jerk that can ruin an excellent shot.

The farther the target is away from you, the more damage a small mistake can do. It is easier said than done but learn to be as calm and fearless as possible.

A calm archer is a good archer - don't allow any fear of failure to enter your mind. Clear your head, and you will be able to shoot straight. Control your breathing during the competition to remain calm.

Make sure all of your fingers release at the same time

If you release one finger from the arrow before the other two, your arrow won't fly straight. Make sure that you let all of your fingers go at the same time.

Gloves can protect you from blisters on your fingers, but they can also interfere with your aim. If you use the same pair of gloves many times, dents or grooves will form in the gloves. The arrow can get caught on those grooves, ruining your shot.

Don't release the arrow until everything feels right. If it feels wrong, start the process of drawing and aiming your bow all over again. Put the bow down, get back into position again, and pull the arrow back a second time.

Follow-through is essential to accurate shooting

Even after you let go of the arrow, you might still make a mistake. You have to make sure that you do not nudge the arrow in the wrong way. This is known as your follow-through technique.

When you are new to archery, your instincts will tell you to do things that are not good for accurate shooting. A new archer may move their bow to one side or the other to see where the arrow is going.

You may move your bow before the arrow is clear of the bow and knock it to the side. It is best not to move the bow until the arrow has already hit the target.

Proper follow-through is also about continuing the smooth motion of firing the arrow after you release it. Continue to pull the hand you drew the arrow with back after you fire, not finishing the motion until your hand is behind your ear.

Continue to move the shoulder of your drawing arm backward after you fire. You will shoot better if it is all one smooth, uninterrupted motion. 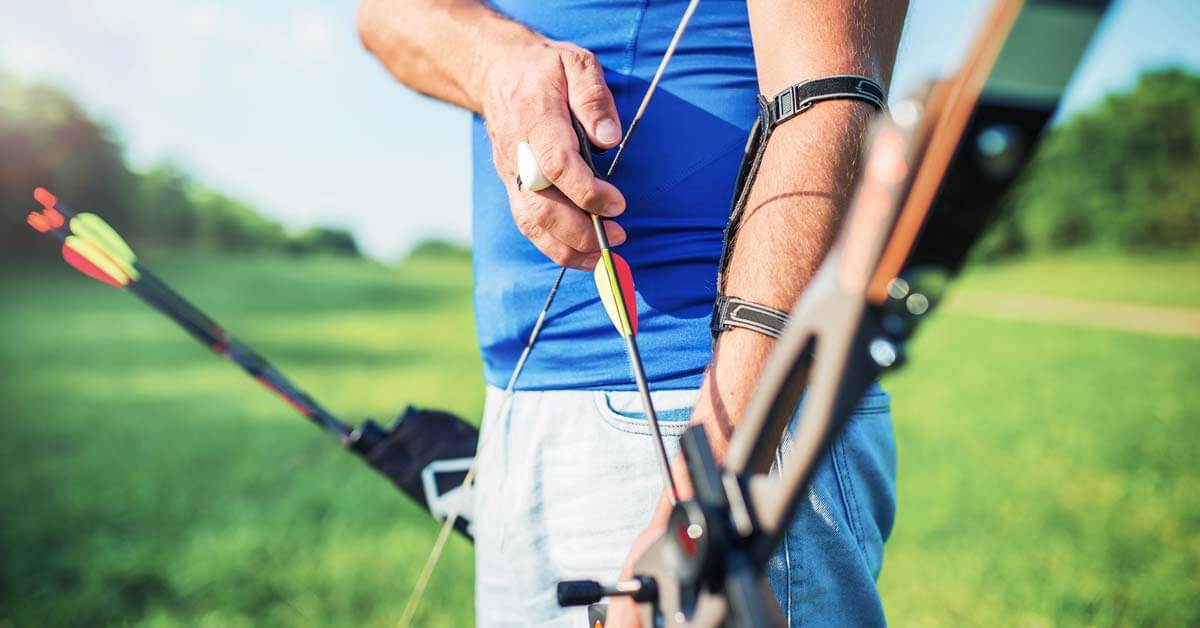 Why Do Archers Let The Bow Drop?