What sort of people buy arrowheads? Are they mostly private collectors, or do museums buy most of them? Where can you sell them?

Many people have huge, famous collections worth millions of dollars. Other dealers and collectors have much smaller collections. You can sell arrowheads online through sites like eBay or on sites that specialize in arrowheads.

While I intend to keep my collection for a long time, I would know how to find a good price for it if I decided to sell it. There are always people looking to buy arrowheads, from single artifacts to large collections. 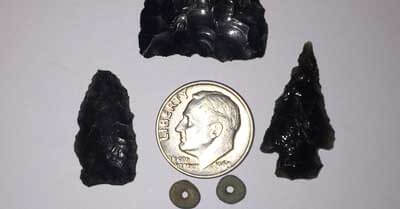 ‍Museums do not buy a lot of arrowheads

Usually, museums rely on donations. Some museums may spend some of their budgets to buy a few special artifacts, but they can't afford to buy everything they collect.

When people donate artifacts to museums, they can write the value of the item off on their taxes. They are also credited for their donation on a plaque at the museum or on a website. This is enough incentive to get people to make donations.

When a museum wants to buy an artifact, they will buy it at an auction. You won't have much luck contacting museums and trying to sell artifacts. They won't want common and ordinary arrowheads, and they aren't the best buyers for rare ones.

The collection took a long time to assemble and was passed down from one generation to another. Much of the collection was found as far back as the 1930s.

The arrowheads were found mostly on farms, which are still a good place to find arrowheads. Land that is fertile now was often fertile hundreds of years ago. People have always lived near water and still do.

If there is anyone near you that has a huge collection, you might contact them in person. If they are still adding to it, they may give you a better price than what you could find online. Even fairly ordinary artifacts might sell - those with enormous collections are not picky about what they collect.

You might be able to find out about local collectors if you ask around. People find and collect arrowheads everywhere, and there could be many local people looking to add to their collections.

People that buy and sell antiques in general trade arrowheads. Antique dealers intend to make a profit from every trade, so they do expect to sell your artifact for more money.

However, it might take you too long to find anyone who would buy it for as much as the antique dealer intends to sell it for. Sometimes, you are better off selling arrowheads to someone who intends to resell them for more.

You can sell arrowheads online

Buyers often look for arrowheads online. You can advertise your collection on arrowheads.com, which is the biggest site for trading arrowheads.

Arrowheads.com allows you to open an online store with many photographs of what you have to offer. Make sure the photographs are as good as possible. A buyer won't be able to tell that your arrowheads are good from bad photographs.

eBay is another place where collectors buy arrowheads. Many large artifact deals happen on eBay. People buy things like roman statues for $68,000 or handwritten letters from famous people for millions of dollars. eBay is a good place for both small sales and large sales.

Unlike antique auctions, you cannot look at what you buy in person first. People, therefore, rely on photographs and the reputation of the sellers.

When you are sending any arrowheads you sell to a buyer anywhere, make sure you protect them from damage. Always protect your arrowheads securely with bubble wrap.

Some people buying and selling arrowheads on eBay are scammers. Some of the scams are obvious - they might claim to be selling a very valuable point for many times less than it is worth. Don't trust these too good to be true deals.

You can sell arrowheads at auctions

The most famous and valuable arrowheads sell at auctions. The most expensive ever sold was worth $276,000.

A collector in Texas was interested in it and bought it at an auction. This point is the "Rutz Clovis," somewhat of a holy grail of Indian arrowheads. It was expected to sell for that much at the auction.

While $276,000 is a uniquely high price, other arrowheads or spear points have sold for tens of thousands of dollars. At the auction where the Rutz Clovis sold, the "Cumberland fluted point" sold for $26,400.

If you want to sell anything at an auction, it has to be valuable. Ordinary arrowheads are not worth enough to sell at auctions.

If you want to sell a number of common arrowheads for only tens of dollars each, people will buy them online. Lots of people on arrowheads.com or eBay want to buy lower-end arrowheads. If you sell several at once, it may be easier to sell them.

Are many arrowheads fake?

Yes, many fake arrowheads are out there, and some forgers use sophisticated techniques to create them. Fakes vary in quality, from very crude to capable of fooling an expert. High-quality fakes are not rare.

If someone is selling an arrowhead for obviously much less than it is worth, it may be fake. Don't trust an offer that sounds too good to be true. Buy from trustworthy dealers.

The better known a dealer is, the more of a reputation they have to maintain, and the harder it is for them to get away with selling fakes.

Some people make fake arrowheads using traditional flint knapping skills. This makes the fakes hard to detect. If you use modern tools to make a flint arrowhead, it will look different, and an expert will be able to tell it is fake.

Modern flintknappers use the same technique as ancient ones, so they produce similar-looking artifacts. Good flintknappers can make tools that look very similar to ancient artifacts they study.

An authentic artifact will show signs of aging. These signs are harder to fake and may not fool an expert. Sandblasting, acid, burying the artifact, and deliberately damaging it can make an artifact appear ancient.

Some forgers modify rather than create artifacts

Some forgers take existing arrowheads or spear points and modify them to make them more valuable. A valuable arrowhead might have a broken point, which a forger can repair.

They might also add notches to an arrowhead in a way that makes it more valuable. They can make an ordinary point appear to be a rare, prehistoric point by modifying it.

Make sure you can prove your arrowheads are authentic

Since there are a lot of fakes out there, collectors may be unsure whether your arrowheads are real. When you are collecting arrowheads, you might take pictures of you taking the arrowheads out of the ground. This may convince a skeptical collector.

Arrowheads from legal sources are legal

Federal agencies take illegal artifacts seriously. Large, organized busts of illegal collections happen from time to time. It is theft to take artifacts from reservations, public land, or private land without the owner's permission to hunt for arrowheads.

One of the larger busts happened in Salt Lake City in 2009. Dozens of people were arrested, and authorities recovered more than 250 artifacts worth more than $300,000 away.

Buy artifacts from people you can trust. Otherwise, you might end up with something stolen, looted, or fake.