Native Americans made arrowheads out of many different types of stone. Arrowheads made of some materials are common everywhere, and others only common in some parts of the country. Flint, chert, and obsidian were all common; people made more exotic arrowheads out of jasper, petrified wood, and other materials suitable for making arrowheads. 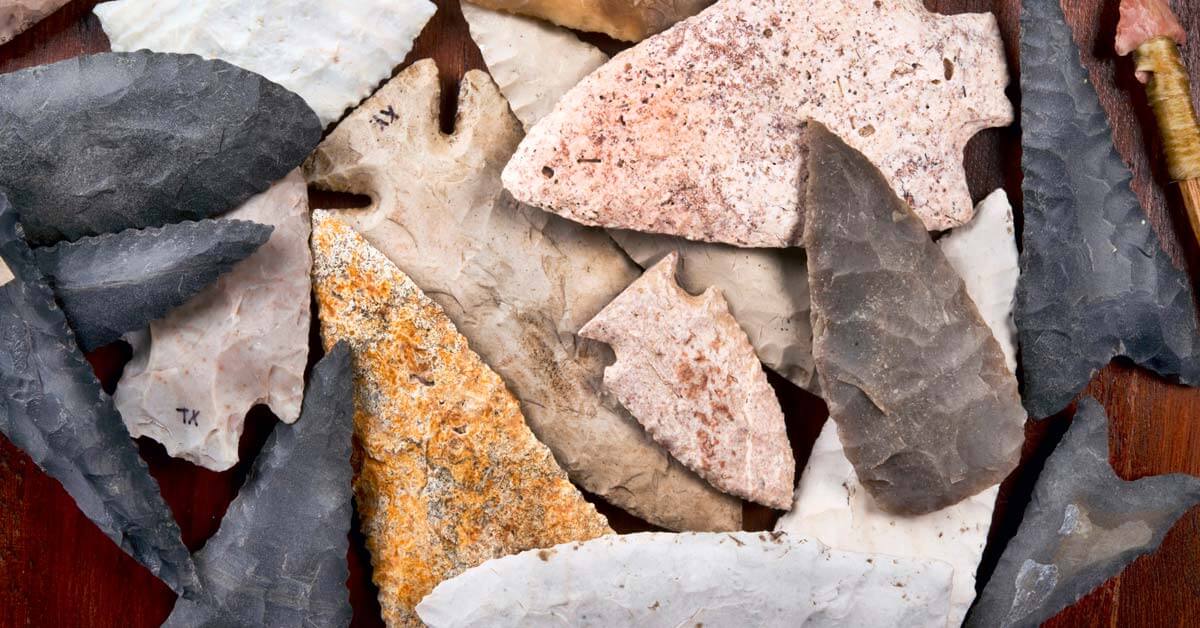 What are arrowheads made of?

If you collect arrowheads, you may find arrowheads made out of many different things in the same area. However, if you want an arrowhead collection that includes exotic materials like petrified wood, you might have to buy the arrowheads, as you may not be able to find them in the woods locally.

Obsidian was an excellent material for making tools as it can maintain a razor-sharp edge. Even a metal blade is not usually as sharp as an obsidian blade, so it was an excellent choice for sharp tools of all kinds. Obsidian arrowheads were less common in some parts of the United States because many people lived far away from the nearest source of the material.

Obsidian is a type of volcanic glass and not a type of stone. Given the right conditions, volcanic glass can form when lava cools. Obsidian is fragile compared to metal but is more durable than ordinary glass, so it was used for knives and spear points as well as arrowheads.

Obsidian tools were traded all over the Americas, so you can sometimes find an obsidian arrowhead in a state where there is no suitable local source of obsidian. Some parts of the country have much more obsidian than people needed for tool making, so people made obsidian tools for trading, and they ended up in distant locations.

In Oregon, at a place known as glass butte, it is easy to find obsidian. You can find pieces of obsidian on the ground among ordinary rocks. It is one of the most obsidian-rich places in the world.

This part of Oregon was not only relevant to nearby peoples but also to Native Americans in faraway parts of the United States. As far away as Ohio, one can find tools made out of obsidian from Oregon. Obsidian arrowheads are the easiest to dig up in the pacific northwest, close to places where obsidian is common.

Flint is available everywhere, so you can find flint arrowheads in any state. Flint can also be used to create fire. You can strike flint together to make sparks that may ignite small pieces of dry tinder, giving you a small fire that you can grow. In later times, a flint mechanism was used to set off gunpowder in muskets.

Making high-quality flint tools is an art that took time to perfect. It could take and can still take a year or more to make flint tools of the highest quality. There is a long learning curve from very poor to excellent flint tools.

The art of making flint tools is known as flint knapping, and it has been practiced for thousands and in a crude form even hundreds of thousands of years. When flint knapping, one begins by breaking a large piece of flint known as a core. After breaking flakes off of the core, you chip, grind and polish the flakes into edged tools.

Some survival enthusiasts still learn flint knapping today. Like anything else, some people can get good at it much faster than others. Gloves are a good idea if you want to try it, you can easily cut yourself otherwise. It takes patience to learn how to make excellent flint arrowheads.

The value of an arrowhead comes from its rarity, so anyone who finds a quartz arrowhead may be able to sell it for more money than a common flint or obsidian point. Quartz is a very hard material, but not so hard that it is unsuitable for tool making. If you have a quartz arrowhead that you are considering selling, make sure you do not sell it for too little.

Petrified wood was once a useful and not merely decorative material. Not only was it used for making tools, but it was even a building material in some cases. In Arizona, builders sometimes used pieces of petrified wood to construct pueblos.

Jasper arrowheads are colorful and uncommon, and often worth more than standard flint and obsidian arrowheads. Jasper, along with agate, is a form of chalcedony. Chalcedony is loosely related to quartz, except that the crystals are microscopic, rather than inches long for quartz crystals.

Jasper was used for arrowheads as it is a hard, durable material that one can craft a sharp edge out of. It is a solid material for making tools, and it is not so rare that people saved it for decorative purposes.

Agate is similar to jasper but is partly transparent. Agate does not contain the impurities that jasper does and therefore consists of tiny crystals that you can see through. Agate arrowheads are also worth more to collectors than arrowheads made of more conventional materials.

Copper and Iron arrowheads from before and after contact

While there was metalworking technology north of the Rio Grande long before Columbus, you will very likely never find an ancient copper arrowhead. North of a certain point, metal was worked without being smelted and was usually used to make decorative objects and not tools or weapons.

While the odd copper spearhead or tool was made long before contact with Europeans, you are not likely to ever find a pre-Columbian copper arrowhead. Copper was scarce and was not used mostly for tools or weapons. There are only a few specific sites where you might have a chance of finding pre-contact metal arrowheads.

Since metal arrowheads were not used for nearly as long as stone arrowheads were, it is harder to find them, even if you are looking for arrowheads from after contact with outsiders. You have a chance if you know where there were campsites or villages in more recent times.

Another frequently used material was chert, another mineral made out of tiny quartz crystals. Many materials were commonly used only in specific regions; for example, you can find felsite and rhyolite arrowheads near the east coast.

The most critical factor determining the value of an arrowhead is how old it is and not what it is made of. A prehistoric arrowhead can be worth thousands or tens of thousands of dollars, even if it is made out of a common material.

Will we ever run out of arrowheads for people to find?

Almost certainly not. We will not run out of arrowheads, and they will not even become noticeably harder to find over time. The number of arrowheads still found in the ground today must be immense, considering how long people have lived in the Americas.

The number of arrowheads people have taken out of the ground must be tiny compared to how many arrowheads are still undiscovered. There was a population of millions for many thousands of years, and each person would use many arrowheads. It is not possible to imagine arrowheads becoming much harder to find in the future.

How were arrowheads attached to arrows?

Native Americans had a few different ways of securely attaching arrowheads to arrows. The arrow maker always carved a wooden slot into the wooden shaft, and then they tied the arrowhead to the shaft using a strong cord. Another way of binding an arrowhead to a shaft was by using glue, which there were many forms of.

What else was involved in making Native American bows and arrows?

Native American bows gradually improved during the centuries before European contact and became powerful enough to kill a large animal such as a bison. The bow has many advantages over the thrown spear. You can carry around a lot more arrows than spears, and an arrow flies through the air faster.

The best bows were composite, as in made out of more than one material. A mix of horn, antler, and sinew could make an excellent bow stave. A more basic bow stave was made out of a single piece of wood.

Bowmakers also used a mix of plant and animal materials to make the bowstrings. Rawhide, sinew (animal leg tendons), and gut were good materials for bowstrings.

Sometimes, bowmakers used plant fibers to make the strings. Plant fiber bowstrings were better but were not always preferred as they take much longer to make.

Arrow makers used stems or shoots to make arrow shafts. Ash, birch, and wild rose were all popular choices for shafts. Arrow makers sanded shafts to straighten them, or used heat and pressure to make them as straight as possible before use.

Different bows have different draw weights. A bow with a high draw weight was best suited for a very strong archer. A weaker person would do better with a smaller bow that had a lower draw weight.

Arrowheads have always been fairly small, all over the world, because a larger arrow will not fly as far, not even with a very powerful bow. For this reason, any unusually large arrowheads you find were probably not arrowheads at all. Instead, they were spear points or knife points, as a large arrowhead is not necessary for killing power and weighs the arrow down.