Deer antlers are complex and come in many shapes and sizes. Hunters have many terms for antler parts. There is a term for the point of an antler.

Everyone knows some of these terms, but others are less well known. The points of antlers, for example, are known as tines. Any point that branches out from a deer antler and is at least an inch long is a tine.

Deer antlers are like human fingerprints - no two are ever the same. They differ dramatically in size and shape from one animal to another. There are both obvious and subtle differences between each pair of antlers. 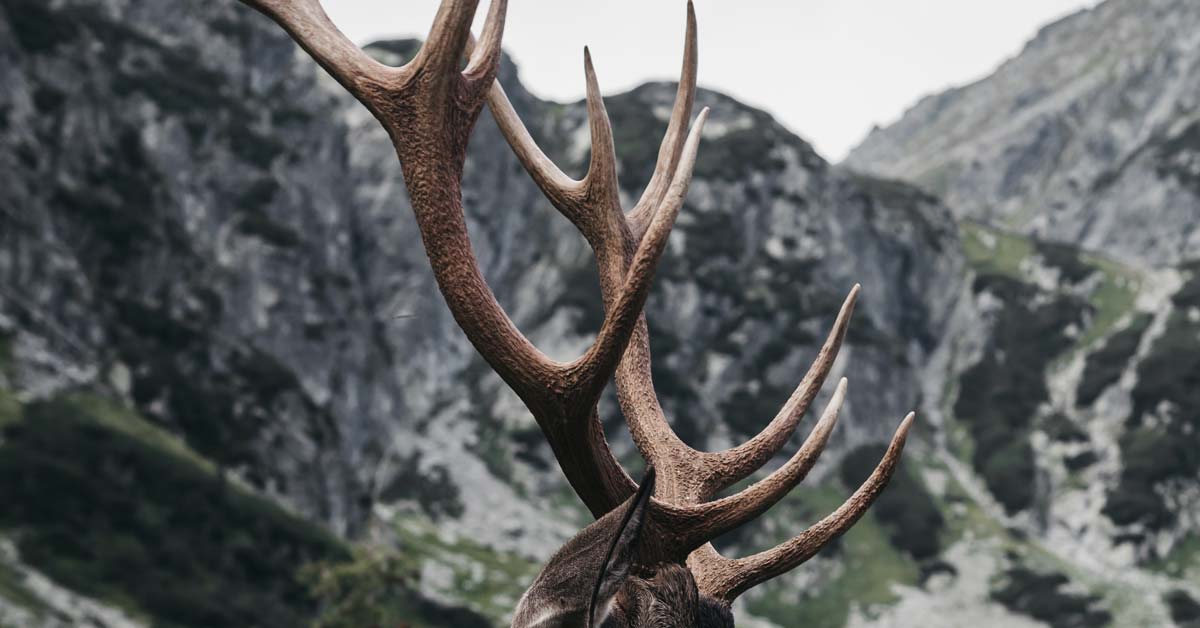 Are antlers the same as horns?

Another difference between horns and antlers is that horns receive nutrients from the animal's blood. Antlers, on the other hand, do not have any blood vessels in them and do not receive any nutrients after they are fully grown.

Antlers are "dead" in the sense that there is no blood flowing into them. Horns are "alive" and require nutrients to stay healthy. While horns are made out of keratin, like fingernails are, antlers are bone.

How often do deer grow and shed their antlers?

Deer begin growing antlers when they are only a year old. At first, the antlers are covered in skin, covered in hair, and soft to the touch. During each summer, the antlers harden and grow to their full length.

A deer's hormones control its antler growth. During later summer, the days are the longest, which raises the deer's testosterone. The testosterone makes the deer's antlers harden, and causes the skin and fur that surrounds the antler to fall off.

By early fall, deer antlers are fully formed and completely hard. Antlers remain firmly in place until late fall, after which the shorter days reduce testosterone and cause the antlers to weaken. The bone weakens around where the antler attaches to the head until the antler falls off, leaving a wound that quickly heals.

It is not until roughly April of the next year that bucks begin to grow a new pair of antlers. Sunlight directly determines when bucks grow and shed their antlers.

Experiments prove that if a buck is not exposed to a normal amount of light, it will not grow or shed its antlers. If researchers expose a buck to winter sunlight levels the whole year round, the yearly growing and shedding cycle stops. The cycle is fixed to sunlight; sunlight does not merely have some effect on it.

What are antler points called for other animals?

Antler points are always called tines. The points of an elk's antlers, for example, are called tines as well.

What determines how many tines grow on a deer's antlers?

Nutrition has a lot to do with it. A well-fed animal will end up with a more impressive set of antlers, with an underfed animal having fewer tines. Genes also make a difference.

What causes a deer's antlers to develop oddly?

Other than genetics, injuries, and nutrition, a buck might have abnormal antlers because of hormonal problems. If a buck has low testosterone, it might grow velvet-covered antlers that do not fully develop or fall off later in the summer.

Sometimes, one can find a doe with antlers because of hormonal abnormalities. Age on its own can also be enough to deform a buck's antlers. If the deer lives long enough, it usually develops deformed antlers towards the end of its life.

When a buck has abnormal antlers due to an injury, it is not always an injury to the pedicle. Damage to another part of the body, such as the legs, can cause the antlers to grow unusually.

Yes, they can grow by as much as an inch per day in some cases. It is rare for anything in nature to grow as fast as an antler does. The fast growth rate is necessary for the deer to be able to replace their long antlers every year.

What do deer use antlers for?

Antlers can be a defensive weapon against other animals. Males also use them to fight each other to compete over females.

Do deer often hurt each other when they use their antlers to duel?

Usually, they do not get seriously hurt. Many animals, including deer, instinctively avoid hurting or killing other members of their own species. They do not normally try to gore each other in the body or in any other way, try to wound or kill each other.

What are some deer antler terms I should know?

A set of two antlers, as opposed to only one antler. A rack of antlers can either be typical or be non-typical. A typical rack does not have any significant abnormalities.

On a typical rack, the antlers point upward and not side to side. All of the points or tines also point upwards. If any of the tines point down or point sideways, it is a non-typical rack.

On a typical rack, the antlers also must be symmetrical or nearly so. If there are any significant differences between the two antlers, then it is a non-typical rack. Non-typical racks are not worth as much to hunters as typical racks.

Velvet is the soft, furry skin and bone that makes up a deer's antlers when the antlers are currently regrowing. Many people believe that deer velvet has medicinal properties. People use a powder made out of deer antler velvet to treat many conditions.

Velvet is said to improve cholesterol, high blood pressure, and kidney problems, as well as other conditions. It is also said to make you feel younger, work as an aphrodisiac, strengthen weak bones and knees, get rid of stress, and help you recover from illness quickly. People claim that deer velvet has all sorts of different health benefits.

Unlike many other natural medicines, it is not proven to work, and there is some hazy evidence to suggest that it doesn't do much of anything. There is not yet enough evidence to either confirm or deny its usefulness as an energy booster or medicine.

If deer velvet does have any medicinal power, it may be because it either reduces inflammation or raises testosterone. There is not enough information to know whether or not deer velvet is safe or effective. Many people that use it report that it has all sorts of positive effects.

A pedicle is the part of the buck's head that the antlers grow out of. During the winter, after a deer sheds its antlers, there will be a bloody spot on the buck's head.

This spot is the pedicle, and new antlers will not grow out of it until well into spring when there is enough light. If the pedicle is ever injured, the antlers may grow in a very unusual way.

The pedicle stays the same after the deer reaches one year old, even if the deer grows a lot after that age. Not only antlers, but pedicles are always different, as unique as human fingerprints.

A tine that points down rather than up. This is abnormal, as a typical rack has all of its tines pointing upward. A deer can either have drop tines because of an injury or because of genes that cause the antlers to develop oddly.

The thickest part of an antler, which connects to the buck's head. The beam forks into smaller branches that eventually reach points.

A fork is found at the end of a deer antler, where the beam splits one last time and ends in two points.

An end of a deer antler that spreads out like a human palm. A palm is much more common for moose antlers than for deer antlers, but it sometimes appears in deer as well.

The first spot where the antler branches off from the main beam is the brow tine. The bay tine, tray tine, and surroyal tine are the second, third, and fourth spots.

Sometimes a buck has only a small spike of bone instead of a large antler that branches out. A deer might have a full antler on one side but only a spike on the other side, usually due to an injury. A spike is often permanent, but a deer can sometimes grow a full antler after having had a spike for a long time.

The burr is the bony growth above the pedicle, where the antler grows from.

A deer with a half rack has normal antlers on one side and no antlers or very poorly developed antlers on the other side. This is usually due to an injury and not to poor nutrition or genes. 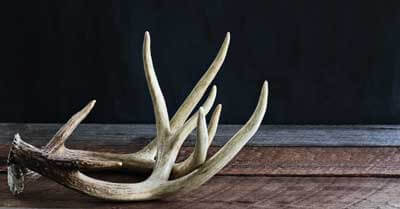 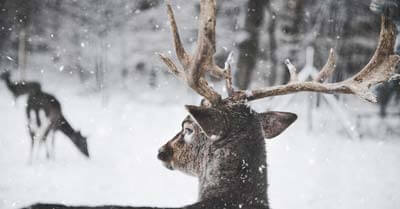 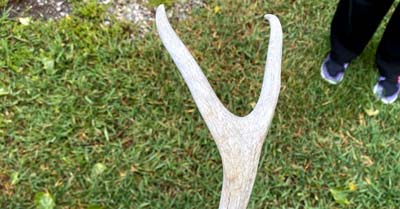 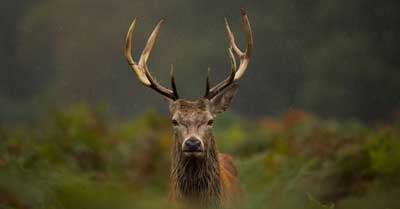