Depending on the intended use for arrows, arrowheads can vary widely based on their shapes and materials and should help you cut into your targets easily.

Have you ever found yourself in a situation where you need an arrowhead for your outdoor adventures? Believe it or not, picking the right arrowhead for your outdoor adventures can be a bit overwhelming. Truth be told, there are many types of arrowheads out there and each is somehow different from the next. This is why it’s always of great importance to know the type of arrowhead you require based on the intended use of the arrows.

And depending on the type of activity you’re planning to indulge in, the type of arrowhead that you choose may differ based on weight, shape, size, and even material. This is exactly why it’s crucial to know different types of arrowheads and when to use each.

Types of arrowheads can be subdivided into three main categories: target arrowheads, blunt arrowheads, and broadheads. While some arrowheads can work for most archery activities, some are specifically designed for a particular activity. Arrowheads can also be categorized based on their specific use.

In this article, we’re going to discuss various types of arrowheads while helping you understand everything that you need to know about arrowheads. 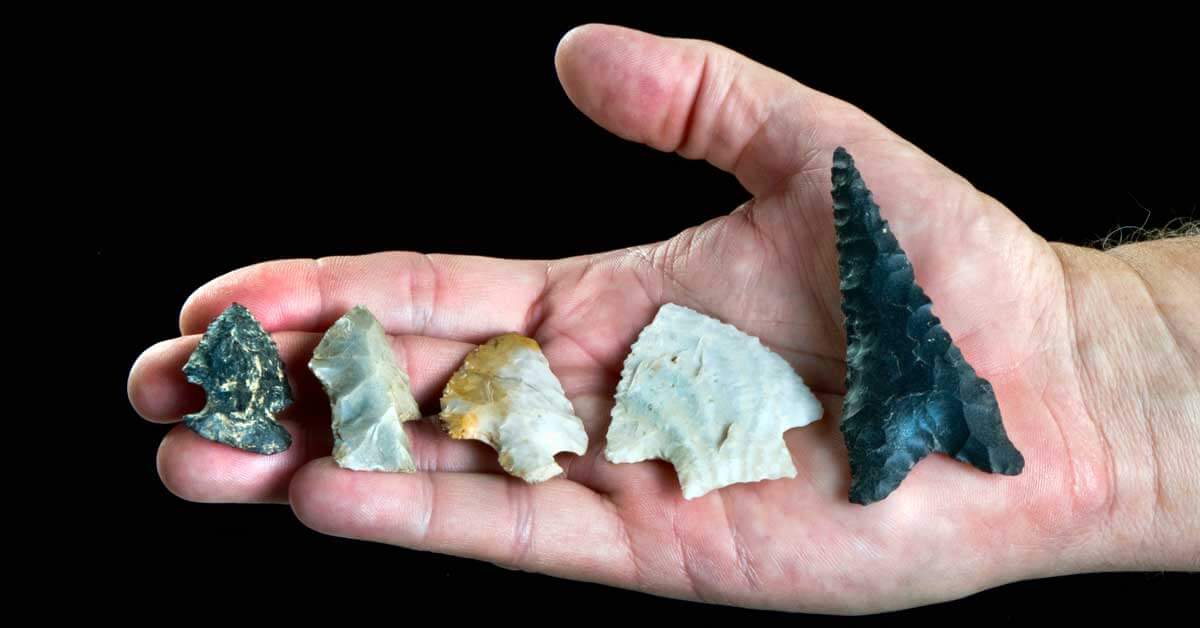 ‍What is an Arrowhead?

Simply put, an arrowhead is the tip of your arrow. It’s usually sharp or pointed to help cut into targets much easier. Today, many arrowheads are made of metal but this doesn’t mean that they can’t be made of other materials. In the past, long before humans learned about metals, people used stones, horns, sticks, or bones to carve arrowheads.

Arrowheads generally measure less than 1 inch in length and weigh just about 15 grams. They are highly regarded as Native American artifacts and are generally viewed to have played a huge role in the cultural developmental stage of mankind.

A Brief History of Arrowheads

As one of the most recognizable and highly regarded Native American artifacts, arrowheads have a deep history dating back over 3,200 years ago. Arrowheads were to earlier civilizations what ammunition are to modern hunters and soldiers. This, however, doesn’t mean that they’re no longer important in the world today.

In addition to offering priceless insight into cultures of long-gone eras, arrowheads are still one of the most important gadgets to modern outdoor enthusiasts. Whether you’re so much into archery or want to indulge in some hunting, arrows are one of your best options.

From a historical perspective, arrowheads date back from 3,200 to 1,000 years ago. It’s believed that metal arrowheads were introduced by the Europeans in the 1500s and 1600s. the way they were manufactured is of historical significance as they were indicative of the technical advances and progress that man had made.

As we noted earlier, arrowheads are divided into three main categories:

Again, target arrowheads are made to easily penetrate archery targets and also to be easily pulled out of the targets. But even with that, it’s always advisable that you handle them with care as they can easily penetrate human or animal skin with ease thereby causing injuries or even death! That being said, you should never aim at anything using a target arrowhead unless it’s your archery target.

The basic tips of target arrowheads are simple. They’re made of short cones with pointed designs that give them more aerodynamic than other types of arrowheads. This is exactly what gives them the ability to penetrate deeper into a target.

One type of blunt arrowhead that has been gaining a lot of popularity with outdoor enthusiasts is the judo point arrowhead. These types of arrowheads are designed with spring wires that are placed sideways from the tip and can either be pointed or blunt.

While judo point arrowheads can be used for practice and hunting small game, they are also ideal for children who want to be safe when practicing archery. This is because they are generally made from soft materials that can effectively mitigate the damage while also not penetrating targets.

This, however, doesn’t mean that blunt arrowheads can be given to children without being supervised. Blunt arrowheads can cause serious injuries, especially when they hit someone at high speed. It’s, therefore, essential to ensure that the kids are monitored and supervised whenever they’re using any type of arrowhead.

Broadheads are, without a doubt, the most dangerous arrowheads that you can use. The tips of these arrowheads have three or more razor-sharp blades that can easily cut deep wounds into a small or big game.

This design means that broadheads can easily penetrate your target and cause more damage and bleeding than any other type of arrowhead. They’re also barbed to ensure that they get stuck in the target and won’t fall out easily.

That’s not all; there are mechanical broadheads that will mechanically open the barbed blades when they come into contact with the target. This not only gives these broadheads larger cutting surfaces but they also tend to be more aerodynamic than broadheads with fixed blades.

The idea here is that mechanical broadheads sacrifice a given level of kinetic energy and penetration so that the blades can be deployed forcefully and can cause a lot of damage. This is essentially why they’re not recommended for target shooting.

With that in mind, broadheads are chiefly used for hunting. They will rip your target apart and can cause serious damage. You should also keep in mind that broadheads won’t make you a better archer.

Here are some of the materials used in making arrowheads.

This is perhaps the simplest and most primitive arrowhead ever made. It basically revolves around putting a sharpened stone on the end of the arrow shaft by splitting the stone slightly. You can tie the flint around the shaft to offer added strength and security.

Flint arrowheads have been used for thousands of years and are even believed to have been used as spear points. The main materials used in making these types of arrowheads are flint, quartz, or obsidian, which easily flake and can be shaped in various ways.

This is a type of sedimentary rock that’s hard and fine-grained as it’s composed of quartz crystals. Chert varies greatly in color but the most common colors are brown, greyish-brown, grey, rusty red, and light green.

One of the greatest technological discoveries by ancient mankind was probably metal. The discovery and use of metal in making various tools was a progress that meant that mankind moved from the Stone Age.

The first metal that was used to make arrowheads was copper. It was abundantly available and could be easily smelted even at low temperatures. Copper Arrowheads were first made in Anatolia (which is modern-day Turkey) before spreading to other areas including the Middle East and Egypt. The main feature of copper arrowheads was their flat shape and tang for fitting into the arrow shaft.

One of the latest discoveries in metallurgy is the use of steel, which is probably the strongest form of metal. A mixture of iron and carbon, steel is used for making modern high-end arrowheads.

This is a classic type of point that is commonly used for practicing archery. They’re made from steel and can also be used for target shooting and small game hunting. The fact that they’re made from steel is essential for more repetitive use. They also have curved profiles to allow easy removal from targets.

Bodkin points refer to arrowheads with triangular or square-based pyramidal shapes. Such arrowhead points are made from unhardened iron or steel and are a lot cheaper when compared to other arrowhead points.

They are hugely popular thanks to their short and rigid features and are known for providing longer and better flights.

Arrowheads with blunt points do not have pointed tips and are made of various materials including plastic, hard rubber, or steel. They are generally used for target shooting and hunting small game.

Commonly used for target practice and hunting for small game, field tips are designed to be wider near the shoulder at their base. This is to ensure that they do not get stuck in the target while offering more precision and penetration than other types of arrowhead points.

These types of points are known for using a unique kinetic energy transference and don’t necessarily have to rely on the cutting action of most points. Thanks to that energy drive, such points can deliver devastating impacts, especially on small game. They also have flares to prevent them from getting hidden in vegetation.

These points are available in a variety of shapes and sizes with some screwing over the shaft while others slipping over the regular field point.

These types of arrowheads have unique tips that are designed with spring-like arms that spring up when the arrow is in motion. This is to prevent the arrowhead from shooting deeper into targets or vegetation. They are generally meant for small game hunting but can cause devastating injuries when used inappropriately.

These are arrowheads with wider tips at the center than the arrow shaft. They are known for hitting hard and leaving a good-sized hole on the target. The only downside is that they can be difficult to remove from the target.

These types of tips are made with straight angles at the tip to give them high penetration. They are perfect for hard targets and can penetrate straight and deeply into the target. These are generally used in archery competitions that require high accuracy.

These types of arrowhead points combine the elements of bullet and field tips to create a tip with a gentle radius, which then broadens into a unique shoulder near the base. Such tips are hugely popular with 3D target shooters as they generally reduce any form of flight drag and can be easily removed from the target.

The blade shapes of the arrowheads include:

These types of blades start wide at the base before narrowing at the tip. The sides curve inwardly and are narrower both in size and shape.

They start wide at the base and maintain almost the same shape towards the tip though it tapers at the tip.

These arrowheads have wide bases and points at the tip but they tend to have the same width from base to the tip.

They start wide at the base before narrowing at the tip but with a more pronounced shape.

Even though they have wide bases and narrow tips, they tend to be straight and not curvy or rounded.

They have serrated edges along the sides, which give them more pronounced looks.

To this end, you should always remember that the type of arrowhead that you choose should be more about the intended use. Many outdoor enthusiasts have their preferences, so it’s ideal to try a few and choose an arrowhead that works best for you depending on your situation.