While the stance, balance, and basic riding skills between snowboarding and skateboarding are essentially the same, skateboarding is harder to learn while also being easier and cheaper to practice than snowboarding. Nevertheless, it is easy to transpose your techniques from one to the other.

There are multiple factors to consider when comparing snowboarding and skateboarding. Usually, beginners want to know which one is harder and more costly to learn. However, because there are so many factors involved, the answer to this is not straightforward. For example, skateboarding is more difficult to learn at a beginner level and is also riskier. However, at a more advanced level, snowboarding is both more demanding and riskier than skateboarding. 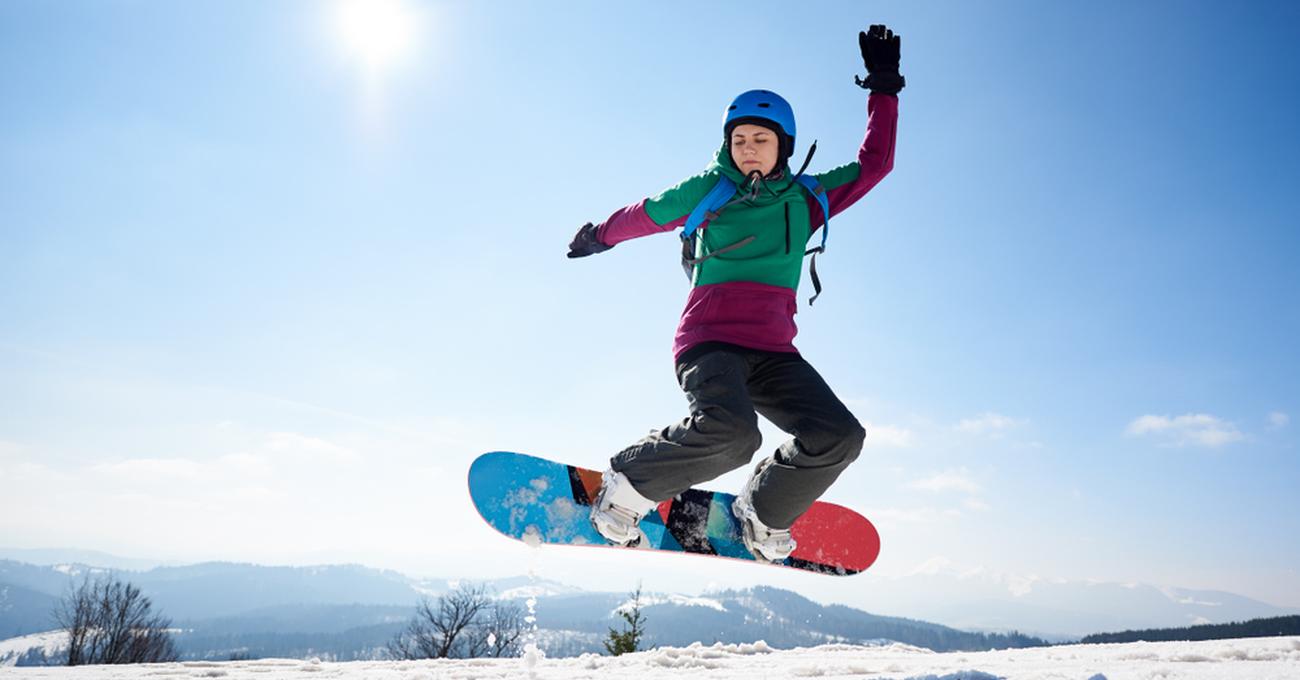 Both snowboarding and skateboarding employ what is known as a surfer stance, which is where the rider stands sideways on their board while facing forwards in the direction of travel.

Although snowboards are usually longer than skateboards, riders of both employ the same stance. Namely, the feet face sideways at shoulder-width apart, with the only difference being that compared to a snowboarder, a skateboarder's feet are closer to the ends of the board.

Another minor difference in the stances is in the angle of the feet. Snowboarders often adopt what is known as a duck stance, where the rider's feet are pointing in opposite directions at 45°. Meanwhile, skateboarders' feet are usually parallel to one another.

Possibly the most significant difference in the stance of the two boarders is that snowboarders' feet are strapped into bindings mounted onto the snowboard deck. Meanwhile, a skateboarder's feet are not strapped onto the board. Therefore, snowboarders can lean backward and forward to quite an extent to maintain their balance, something skateboarders cannot do.

Finally, on a snowboard, the combined weight of the bindings and boots affects the balancing techniques, and if you are transferring from skateboarding to snowboarding, this is something you will have to get used to.

The most significant difference between snowboarding and skateboarding that affects the rider's balance is the fact that skateboards ride on 4 wheels while snowboards ride primarily on the board's edge.

Therefore, the basic riding skills involved have fundamental differences, the most pertinent one being the way the rider balances on their board. Balance is one of the first things that practitioners of each sport have to learn how to build, and although balancing on one isn't necessarily more challenging than the other, these balancing skills are not entirely transferable between the sports.

Conversely, the technique for carving is highly similar in both snowboarding and skateboarding. Carving is the process of initiating turns using your upper body, head, and shoulders. Both snowboarders and skateboarders turn by shifting their body weight towards an edge. In skateboarding, leaning makes the wheels turn, while on a snowboard, leaning edges the board into the turn.

The skills required to stop a snowboard are very different from those needed to stop a skateboard. Skateboarders stop by footing one of their feet on the ground or by bailing the board and running after it. However, since snowboarders' cannot free their feet from the board, they have neither of these options at their disposal.

With regards to the learning curve of each sport, most practitioners argue that skateboarding poses more challenges for beginner learners as compared to snowboarding. Further, there are several reasons why this is the case.

The first reason why skateboarding has a steeper learning curve than snowboarding is that a skateboard begins immediately rolling as soon as a rider places their foot on it. Therefore, the possibility that the snowboard will shoot out from under your feet, causing you to land on your butt, is pretty high, especially for beginners.

Meanwhile, snowboarders are bound to their board and start off practicing on a parallel slope, thereby making it relatively safer for beginners.

Notably, honing in the fundamentals of balancing and maneuvering on a skateboard requires a lot of time, effort, and practice, as it tends to be very tricky for beginners to get the hang of skateboarding basics. Meanwhile, it typically doesn't take more than a day of practice for a beginner snowboarder to learn how to ride down a mild slope.

However, this does not mean that learning advanced skateboarding tricks is easy as the more complex skills require a lot of practice and persistence.

With regards to cost and accessibility, skateboarding easily wins over snowboarding. Skateboarding is not very costly as it costs between $100 and $300 for a skateboard and perhaps another $100 for safety gear.

On the other hand, snowboards tend to be more costly than skateboards and necessitate the purchase of boots, bindings, snowboarding pants, snowboarding jackets, gloves, and goggles. Add to all this the traveling costs and the tickets for the snowboard lift, and what you have is a hefty investment into your sport of choice.

Therefore, compared to skateboarders, snowboarders have to spend more money and effort to practice their craft, making skateboarding more affordable and accessible than snowboarding.

Skateboarding entails a higher risk of injury, even while riding at low speeds. Even a minor fall on a skateboard can cause you to hit the concrete pavement below very hard, and if a beginner skateboarder does not take proper safety precautions, they could end up injuring themselves pretty severely.

On the other hand, snowboarding is less risky and dangerous than skateboarding since most falls on a snowboard lead to the rider sliding along the snow. However, for intermediate snowboarders, the risks tend to multiply as they attempt to take on bigger and steeper slopes with a lot more turns and at higher speeds.

Falling downhill while riding fast on a snowboard can be very hazardous if you don't know what you are doing. Moreover, since the rider remains bound to their snowboard even during a fall, it is not uncommon for snowboarders to severely injure their legs during a nasty fall at high speed.

For one thing, a snowboarder's feet are tied to their board, making tricks like flips and Ollies much easier to execute. Further, there is less risk of injuring yourself doing snowboard tricks because if it goes wrong, you will land in the snow rather than on a concrete pavement.

The fact that a skateboarder can jump off of their board during a trick makes performing skateboarding tricks much riskier, especially since the rider will be landing on concrete if they mess up.

Lastly, tricks that involve jumping are very different for both sports, hence making this skill not easily transferable from one sport to the other. Jumping in skateboarding involves kicking the rear of the board while briefly lifting the front foot to make the board pop up off the ground. On the other hand, jumping in snowboarding involves simply popping the feet up to get the board off the floor, which works because the rider's feet are bound to the board.

Even though the two sports demand slightly different skills from the riders, balancing skills from snowboarding will quickly transfer over to skateboarding and vice-versa. Experienced skateboarders are able to ride down slopes with a balanced stance and link turns on a snowboard practically on their first day.

Since craving turns on a skateboard downhill is a similar skill set to turning on a snowboard. All they have to get used to is pivoting the front foot and riding the edge of the snowboard. However, while skateboarders can quite quickly transfer their skills over to snowboarding, the reverse is not always true.

Being an experienced snowboarder does not guarantee that you will be able to transfer your skills to skateboarding. The primary reason for this is that riding on wheels takes more practice than riding a snowboard. For beginners, even those who have snowboarding experience, there is a tendency to let the skateboard slip away from under your feet, which can never be a factor in snowboarding.

Our research into the matter tells us that in the United States, both snowboarding and skateboarding are pretty much equally represented and are hence equally popular. At the state or city level, popularity may vary between the two sports depending on the weather conditions.

In terms of sports events, both skateboarding and snowboarding are equally represented in the United States. Some of the most popular summer skateboarding events are:

Meanwhile, some of the most popular winter snowboarding events are: