How To Recognize a Fake Arrowhead

An expert can usually tell the difference between a real and a fake arrowhead, even if it is a well-done fake. Many fakes are obvious.

Making an arrowhead that can fool an expert is no easy task. Someone who occasionally puts a bit of time into learning to make stone tools may not be able to make good ones for years.

Even if you are not an expert, you can learn to differentiate between real and fake arrowheads. A fake arrowhead may have a perfectly even edge or rectangular rather than circular chips taken out of it. This indicates that a forger used modern tools to make the arrowhead.

Making stone arrowheads is a skilled craft, so learning how to make a fake arrowhead is a long process. An amateur will always create a crude and obviously fake arrowhead. Even if a forger makes a high-quality fake, there are usually ways for an expert to identify it. 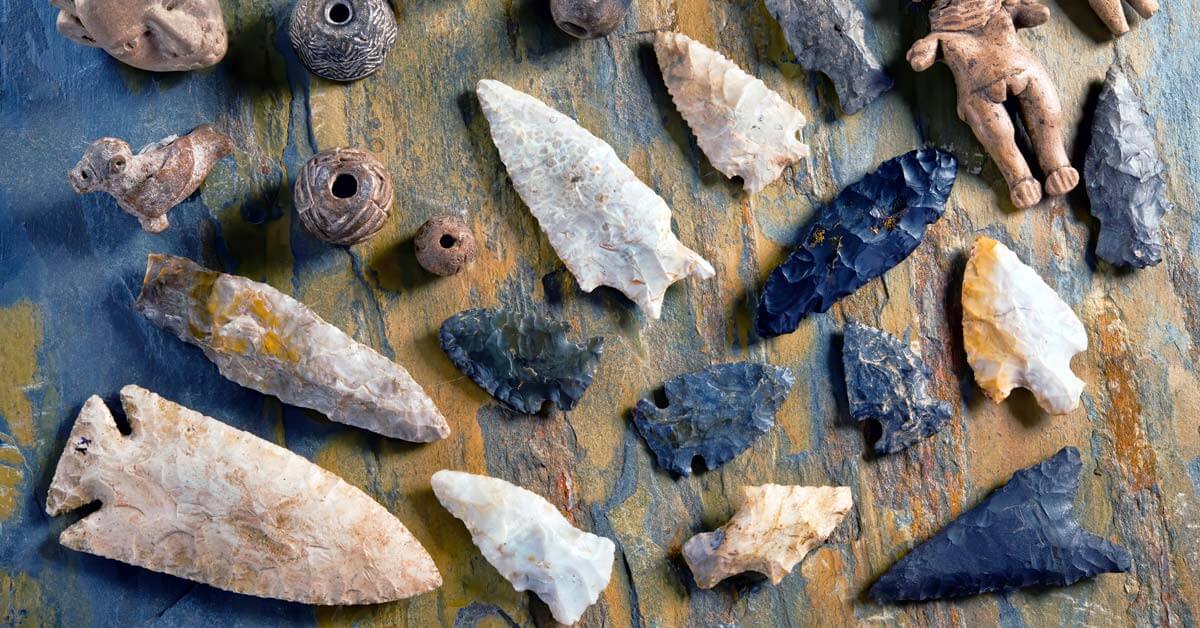 After someone sells a perfectly legitimate artifact they found, a fraudster might create fake documentation about where the arrowhead was found, who previously owned it, or how ancient it is to make it sell for more money. An arrowhead's background determines how much it is worth, so fraudsters often have more to gain with fake documentation than with fake artifacts. When you buy an arrowhead, you risk not only buying a fake arrowhead but an ordinary real arrowhead for far more than it is worth.

To avoid losing money on fake artifacts, you should get a guarantee - in writing - that you can get your money back if your artifacts turn out to be fake. A dealer might sell you fake artifacts without knowing they are forgeries. People who know about and collect arrowheads sell fake arrowheads to each other without noticing that they are not real.

The easiest way to judge an arrowhead's authenticity is to take it to dealers. This is much easier than trying to identify fakes yourself as an amateur.

There is no way to have a 100% chance of identifying a fake arrowhead, but most fakes are noticeable. Getting a second opinion is a good idea. If two experts say that an arrowhead is genuine, it quite likely is.

When an arrowhead is left in the ground for hundreds or thousands of years, ferric oxide will attach itself to the arrowhead. This is known as patination or mineralization, and it is not easy to fake. Experts use ferric oxide to prove that an ancient artifact is real.

Some forgers will attempt more advanced forgeries that they hope will fool experts. This can include removing ferrous oxide (oxidized iron) from a real arrowhead and then gluing it to a fake one.

However, if it is only glued on, you can remove it easily, which is not the case with real patination. With a magnifying glass, it is easy to notice the glue.

Looking for patination is one of the best ways to not be fooled by an expert forgery. Even if forgers use acid, sandblasting, or heat treatment to create an ancient-looking arrowhead, they might not have any way of faking patination.

Arrowheads and other tools took long enough to make, that people repaired them more than once before discarding them. Spearheads and arrowheads were recovered and sharpened. A real arrowhead, therefore, will usually show signs of re-sharpening.

Cheap arrowheads are not the most likely to be fake. Since an ordinary arrowhead is only worth a few tens of dollars, it is not worth the time to fake them. Exceptional arrowheads, spear points, axes, and other artifacts such as pipes are worth more money, so forgers are more likely to make them.

Forgers can be sophisticated and use a variety of different tools. They might use miniature jackhammers to chip the stone and bury the artifacts in the ground to create signs of authenticity. Artifacts are sandblasted to make them look old and weathered.

Another way of making fake artifacts is to chip the flint without using any modern tools. Flintknapping takes quite a while to learn, but once you can do it well, you can make arrowheads in the way people made them in the past. Forgeries made by flintknapping are hard to identify, though they may still lack the signs of having been in the ground for a long time.

Look at fake artifacts and compare them to real artifacts

Some people plan to collect, trade, and sell artifacts for a long time, sometimes as more of a hobby than a business. Such people care enough about ancient North American artifacts that they should learn to identify forgeries.

If you are only slightly interested in artifacts, it may not be worth your time to learn to identify fakes reliably. It takes someone with a lot of experience to identify an excellent fake. Amateurs can, however, identify poorly made fakes that forgers made using modern tools.

History does not prove authenticity

Sophisticated fakes are nothing new, either. Even decades ago, forgers would sometimes purchase real artifacts and learn to reproduce them as closely as possible. For decades, forgers have been using accurate three-dimensional drawings of real artifacts to help them create fakes.

Making money from fake artifacts is nothing new. People made fake antiques before modern times in China, and even the Romans made forgeries of antique Greek art.

Making fake arrowheads was popular in the 1930s when mass unemployment made people turn to unusual and illegal ways of making money. In Michigan in the 1930s, people set up machine shops producing nothing but fake artifacts.

How to recognize a fake arrowhead

A real stone knife or ax will show signs of use. People would not have made a knife or ax and then thrown it away before using it much. Patina, or signs of wear and use, identify an artifact as real.

Many fake artifacts do not attempt to show any signs of wear and are therefore easy to spot. However, more sophisticated forgeries include fake patina. A good forger will do what they can to create signs of wear, tear, and age.

Some forgers use motor oil to age a flint object artificially. If you soak a flint artifact in used motor oil or grease, some grime will get inside cracks in the flint, which can make the tool appear authentic.

A forger might also throw a fake arrowhead dipped in motor oil into a fire to replicate the wear of an old arrowhead. Since pine needles are slightly acidic, burying an arrowhead with pine needles will stain it and make it appear older.

A forged stone artifact might be dipped in hot acid to make it look authentic. The acid gets rid of small loose flakes that would otherwise indicate the arrowhead was made recently and was not in the ground for centuries. The acid also gives the stone a weathered look.

Acid can attach itself to stone quickly. It is not easy to remove the algae completely by scrubbing, so a fake stone tool with algae attached to it may appear very old. Experts know that algae can quickly attach to the surface of a stone and that algae never proves the artifact is very old.

Chemicals are also used to artificially age arrowheads, in a way similar to what is done with acid. Sandblasting is often more effective than using acids or chemicals. It gives the flint a look similar to a genuine antique artifact.

How To Recognize a Fake Arrowhead