How To Draw & Shoot a Recurve Bow

After choosing the right bow and the right arrows, you need to learn how to shoot correctly. Get into the proper stance, use the right grip, and focus.

It is hard to shoot well if your bow isn't right for you. Choose a bow that is appropriate to your height and strength. Use safety equipment that fits you properly and the right arrows for your bow.

First, enter a proper shooting stance - stand perpendicular to the target, don't lean to either side, and keep your feet at shoulder width. Close one eye when you shoot, and don't move the bow in any way that will knock the arrow off course. 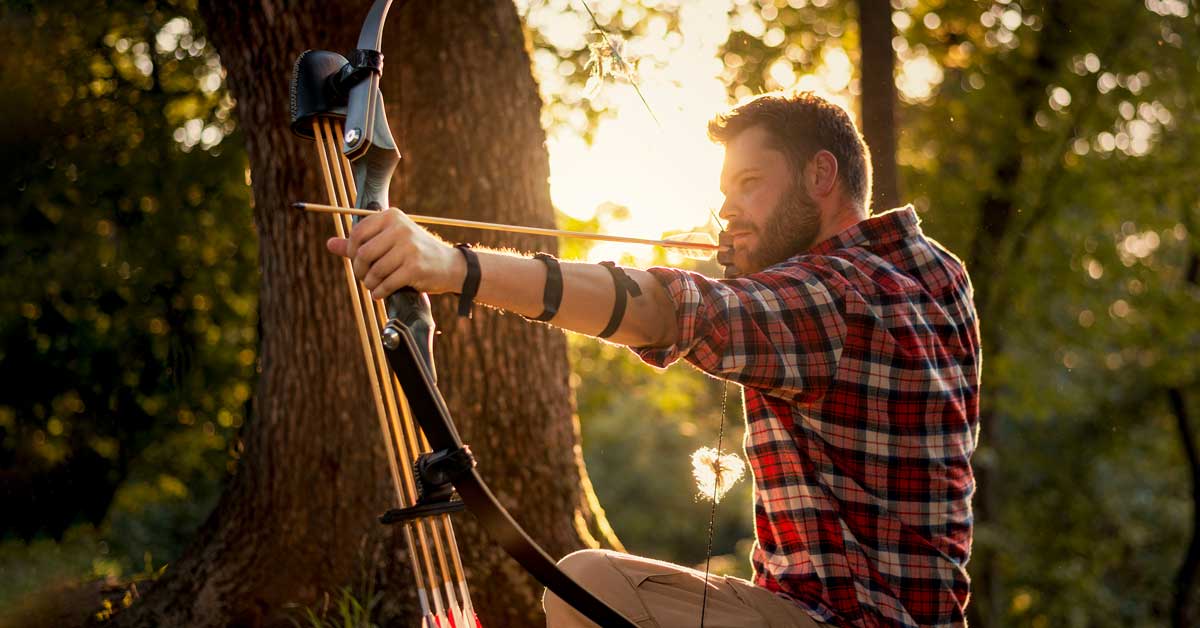 ‍Use a typical technique to shoot a recurve bow

When someone is new to baseball, archery, or anything else, they might experiment with their own technique instead of doing it the right way. You might be more comfortable using your own technique in the short run, but this will hurt your success later on.

Use a standard archery stance even if it doesn't feel right at first. You will quickly get used to shooting with a correct archery stance. Your experimental technique will never be as effective as the tried and true way of shooting a bow.

This guide assumes you are right-handed

Why start with a recurve bow?

Compound bows are allowed in many target shooting contests, but many other tournaments require traditional recurve bows or longbows. Compound bows are not allowed at the Olympics, so you cannot reach the highest competition level with a compound bow.

Compound bows are also more expensive than recurve bows. A cheaper compound bow is more likely to be a low-quality product than a cheaper recurve bow.

Recurve bows are also powerful and accurate. A compound bow made using modern technology does have an advantage over a traditional bow, but you can still do very well with a recurve.

It does take more strength to use a recurve bow, but that does not mean you have to be muscular to use one. Ordinary people can learn to shoot typical recurve bows without strength training.

The two stances commonly used by beginners in archery are the square stance and the open stance. Both are good for accuracy, stability, and shooting the arrow without having the string slap against you.

Archers of all skill levels use both the square stance and the open stance. However, archers that are past the beginner stage also learn the other two stances, the natural and closed stances.

The square stance is the most popular way of shooting for both beginners and experienced shooters. It is a good stance to start with, and you might want to get good with this single stance before you try the others.

First, put both of your feet parallel to the shooting line, with one foot on one side of the line and the other foot on the other. Your feet do not point at the target; instead, they are perpendicular to it. You turn your hips and shoulders to face the target.

The open stance is the second-best choice for beginners. Instead of having both feet parallel to the shooting line and perpendicular to the target, one of your feet is in a different position.

In the open stance, your front foot (whichever foot is the closest to the target) should be on an angle more towards the target. You should not rotate your front foot so much that it actually points at the target, but rotate it in that direction.

The closed stance can help you pull the string back all the way if you have trouble pulling the bow fully - it is a good stance for powerful shooting. A disadvantage is that you might get slapped by the bowstring, so wear protective equipment.

Is there a best stance to draw a recurve bow?

Since all four stances are used by very skilled archers, there is no best one. In swimming, the crawl is the fastest stroke, but different professional archers use different stances.

There are some things that all four stances have in common. First, stand up straight with your feet at shoulder width. Put the same amount of weight on both feet.

Keep your back straight and relax your shoulders. Don't lean forward, to one side, or backward.

Take the arrow out using your thumb and forefinger. Put the string inside the nocking point at the back of the arrow. Then, slide the arrow down the bow until it reaches the right position for shooting.

Raise the bow and pull the arrow back

Raise the bow with your left hand. Do not pull the arrow back when you are raising the bow. Raise your arm to shoulder height.

When you are raising the bow, don't ruin your stance. It is easy to move out of a proper shooting stance when raising the bow or pulling the arrow back.

Hold the arrow with the fingers of your right hand. Usually, archers pull the arrow back with the index finger above the arrow but their other fingers below it.

After you pull it back to the anchor point, the arrow will be close to your eye, allowing you to aim properly. The elbow of your right hand should be level, parallel to the ground. Most archers close one eye when shooting.

When you are shooting a recurve, you may not be using sights. Shooting without a sight on your bow is known as instinctive shooting.

If you are very close to the target, aim the arrow slightly below the center, or else you will shoot too high. If you are shooting from a long way away, aim slightly above the bullseye.

To release the arrow, pull your right hand slowly back until it reaches your ear. Pulling the arrow back and letting it go should be a single movement. Don't do anything to nudge the arrow in the wrong direction when you let it go.

Learning how to shoot properly takes practice. If your arrows are going too high, adjust your aim a little lower, and vice versa. Learn a little at a time - even someone who gets good at archery quickly is not likely to be any good on the first day.

When you are new, aim for a very close target - as little as ten yards away. If you are a beginner and shooting at farther targets, you will rely too much on luck and won't learn much.

You will get better faster and not slower if you aim for a close target. Get good at shooting from ten yards first, then learn to shoot from farther away.

Grip the bow lightly or not at all

Don't hold the bow tightly. Your instincts might tell you that gripping the bow will hold it steady, but it will have the opposite effect. You need to grip your bow lightly to hold the bow steady and shoot accurately.

Better shooters don't hold onto the grip at all. They hold the grip between the left thumb and forefinger without holding on to the grip. Wear a wrist strap so that your bow doesn't drop to the ground after you let the arrow go.

While the competitions you eventually participate in may not allow sights, using a sight at the start might be right. Wean yourself off of the sight fairly early on, but it can boost your confidence to practice with a sight at first.

You might also buy a clicker, which is a device that clicks when you pull your bowstring back far enough. It would be best if you also stopped using a clicker fairly early on, but it helps you learn.

Regardless of your skill level, you might use an arm-guard and a finger tab. A finger tab helps you pull the string back without getting blisters on your fingers, and an arm guard protects you from getting hit by your bowstring.

How To Draw & Shoot a Recurve Bow