How Old are Adena Arrowheads?

Adena arrowheads are up to a few thousand years old - rather ancient, but not nearly the oldest projectile points you can find in North America.

People used Adena points between 3500 years ago and 1300 years ago. In North American archeological terms, they were made in the late archaic period and the woodland period. Most of the points are found in the Ohio River Valley region.

I collect arrowheads and projectile points, and I love to know about the cultures that created them. The mound builder cultures flourished for thousands of years and built the largest precolumbian structures north of Mexico. 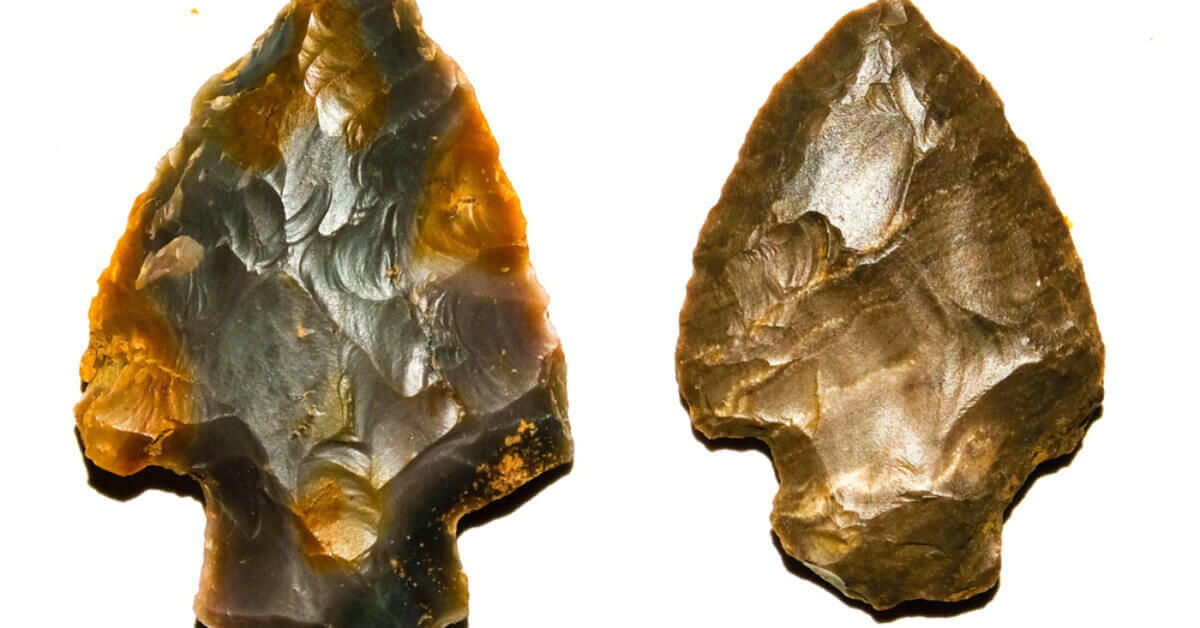 Adena "arrowheads" are spear and dart points, not arrowheads. They are too large to be arrowheads. While there were bows and arrows in North America thousands of years ago, they did not exist in the eastern United States until later.

Adena points vary greatly in size. They are anywhere from 50mm to 150mm long (usually shorter rather than longer), 23mm to 43mm wide, and 7mm to 15mm thick (usually only around 9mm).

The points were made out of "cryptocrystalline materials" such as flint and chert. Some uncommon Adena points are made of more exotic materials like rhyolite, quartzite, and jasper.

Adena points have a somewhat distinctive shape. They are roughly triangle-shaped, with a stem at the bottom of the triangle to attach the point to a shaft.

The blade widens as it moves down from the point to the base. Some other types of points are the broadest in the middle of the blade; this is not true for triangular Adena points.

The stem is usually straight, but it can sometimes be slightly narrower at the bottom than at the top, which is where it connects to the point. Adena points were manufactured first by percussion flaking and then by pressure flaking to touch up the blade.

Heat treatment was used to strengthen Adena points. If you heat up a stone, you can change its properties and use the treated stone to make better tools. This is a very ancient technique, possibly more than 100,000 years old, which remained in use until stone tools disappeared.

People heated stones up by putting them underneath a fire pit. If a stone reaches a high enough temperature, it becomes easier to work. Heat treatment can even make stone tools much sharper.

Archeologists have recognized Adena points as a distinct type since as far back as 1902. The points are interesting because they are associated with the earliest mound-building cultures.

Who were the mound builders?

The first mound builders started very long ago, as far back as 3500 BC in Louisiana. Arguably, even older mounds exist, although the dates are disputed.

The first mounds were built by hunter-gatherers. While it is unusual for hunter-gatherers anywhere in the world to manage large construction projects, this is achieved sometimes. The oldest known temple in the world, Gobekli Tepe in Turkey, was built before agriculture.

Later mounds were built by farmers with higher population densities. One of the larger and better-known mounds is Cahokia in Illinois. The mound is more than 100 feet tall and is the largest Native American structure north of Mexico.

Something like 20,000 or 30,000 people lived at the site in the twelfth century AD. The number of inhabitants started to decline before contact with Europeans or their diseases.

Mounds were constructed by societies with an upper class and with a food surplus that allowed for building projects. A huge number of hour's worth of work was required to build a mound. Thousands of workers had to dig and move dirt according to a plan for a long time to complete a mound.

Who were the Adena people?

The Adena people were mound builders who lived from 2800 to 2000 years ago in the eastern United States. Many of them lived in Ohio, which was where the Adena points were discovered. They also lived in parts of Indiana, Kentucky, Pennsylvania, and West Virginia.

The name "Adena" is a European name, not the name of a nation that still exists. We do not know what the Adena people called themselves. The name comes from the property of an Ohio governor, which had a large mound on it.

While the Adena culture disappeared or changed beyond recognition before contact with Europeans, we can still learn a fair bit about them through archeology. Their architecture, art, and tools were different from people in different locations and from people in earlier and later times.

Archeologists can recognize the existence of a distinct culture that existed for some time by looking at artifacts. We can learn much about the lifestyles of people that there is no written record of.

Archeologists will even try to learn about the beliefs of ancient people by their artifacts. Much of what archeologists believe must be wrong, but different archeologists often come to the same conclusions when they study an area.

The Adena people are almost hunter-gatherers when they first appeared in about 800 BC. They gradually became more agricultural and grew squash, sunflowers, tobacco, and other common North American crops.

They were semi-nomadic and usually did not remain in their small villages for very long. They produced pottery, the oldest in Ohio.

The Adena built mounds to bury their dead and built them to mark their territory. More than one person is buried in each mound, along with their valuables. Some of the dead were buried in tombs rather than cremated.

How Old are Adena Arrowheads?