How Much Is a Clovis Arrowhead Worth?

An arrowhead's value depends on its condition, quality, antiquity, and type. What material it is made of affects its value. Since it is easy to find ordinary stone arrowheads, an arrowhead has to stand out and be unusual to be worth more than a very little money.

One of the most valuable ancient American artifacts is a prehistoric Clovis point, sometimes worth thousands or as much as 276,000 dollars. Usually, arrowheads are only worth about $20 or so, but rare Clovis points are worth a lot more. 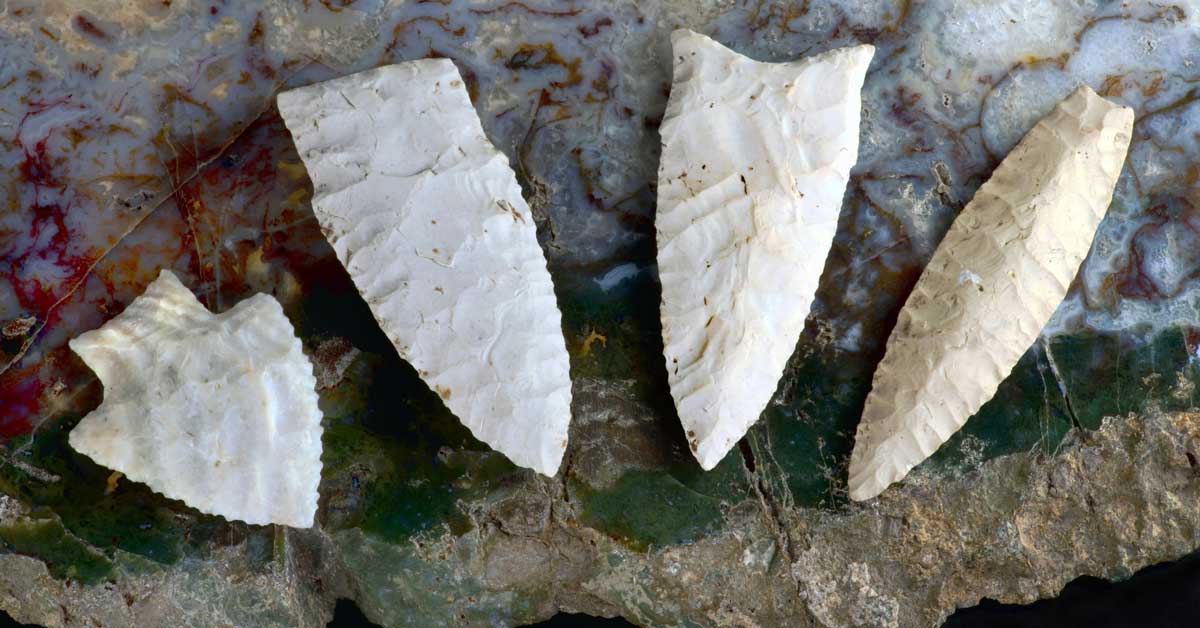 ‍What is a Clovis point?

While Clovis points are often referred to as Clovis arrowheads, at least most of them are spearheads. Probably no one used the bow and arrow 13,000 years ago in the Americas. Therefore, probably no Clovis "arrowheads" are truly arrowheads.

The Clovis points are large, fluted (grooved), and are made of chert or more common stones. They are a distinctive type of technology that was replaced more than once before contact with Europeans. Clovis points are one to six inches long and much thinner.

Clovis points have a concave base and convex sides, so they are widest in the middle of the spearhead and narrower at the bottom, where the spearhead was connected to the shaft.

Clovis points disappeared rather early in American prehistory, replaced by smaller Folsom and Dalton points. They may have only ever existed in North and South America, as no one has found similar points anywhere in Asia.

Most Clovis points are darts for atlatls or spear-throwers. An atlatl is a lever one can use to launch darts.

Spear-throwers were used on all continents, mostly before bows and arrows were available. The atlatl did not disappear completely after the bow appeared, and the Azteks were still using the atlatl in historic times.

Why are Clovis points worth so much more than ordinary arrowheads?

Their value comes from their rarity. While you can find arrowheads made in recent centuries in your local woods, Clovis arrowheads are much harder to find. They can, therefore, sell for hundreds, thousands, or rarely even hundreds of thousands of dollars.

Many Clovis points have been found over the decades since they were first identified as a distinct arrowhead type in 1932. People possess at least 10,000 Clovis points in total.

While people have more than a few of them, they are still rare enough to be expensive. A Clovis point might be worth only a few hundred, or you might be able to sell it on eBay for $14000. They vary a lot in price, so make sure not to sell your point for much less than it's worth.

Where can you find Clovis points?

You can find them all over North America, but in South America, they are not found at all any farther south than Venezuela. It is easiest to find them in specific parts of specific states.

While Clovis points turn up in many other states and locations, it is not easy to find them in any local forest where you can find less valuable arrowheads.

How are later Folsom and Dalton points different from Clovis points?

Folsom points replaced Clovis points and were used from 9500 BC to 8000 BC. When they were first discovered in the 1920s, archeologists were surprised that such ancient points existed in the Americas. Many people had assumed that the Americas had not been inhabited that long ago.

While Clovis points only have grooves running along a small part of the spear point, Folsom points have grooves all the way from the base to the tip. The grooves may have helped attach the point to the wooden shaft. Folsom points took great skill to make, and modern people who try to recreate stone tool-making techniques find it takes a long time to learn to make Folsom points.

Dalton points were made at the end of the ice age, from 8500 to 8000 BC. The Dalton points are very convex at the base. This makes them different from Clovis points that are narrower at the base than in the middle.

Dalton spear points were often reworked into other tools, such as drills and hide scraping tools. A point that worked well on a spear could also be used as a knife or saw. After a knife was worn down through frequent use, the stone could be reworked into a chisel or scraper.

Like Clovis points, Folsom points can also be worth thousands of dollars. Large Folsom points found in New Mexico are currently worth $4000 or not much less than that. The prices are all over the place, with a few thousand dollars for a large point in good condition being very roughly a normal price.

Arrowheads from any later than the Folsom period are worth much less. Arrowheads that are only a few thousand years old are not ancient enough to be worth much money.

While a Folsom or Clovis arrowhead in good condition might be worth $5000, $10000, or in rare cases a lot more, a late prehistoric arrowhead may be worth only a few hundred dollars or less. Only the oldest arrowheads impress collectors enough to be valuable.

If you find an arrowhead that seems like it might be prehistoric, make sure you identify it and sell it for what it's worth. Countless people must have sold valuable arrowheads for very little money over the decades.

Arrowheads vary immensely in price. Some are worth only a few dollars, but there was one case of a Clovis point selling for more than a quarter of a million dollars.

How Much Is a Clovis Arrowhead Worth?