If you want to find arrowheads in the woods, do you have to dig for them? Can you find a lot of arrowheads close to the surface?

It is not usually ok to dig where you are looking for artifacts. Usually, collectors look for arrowheads on other people's private property with their permission - they might not be allowed to dig deep holes. In some places, archeologists do dig deep into the ground, but this is not always necessary.

I have been finding arrowheads for years, and I find them close to the surface, not deep underground. A part of the woods where the was once a campsite is the best place to look, followed by a farmer's field. You won't have to get a shovel out and dig in either case. 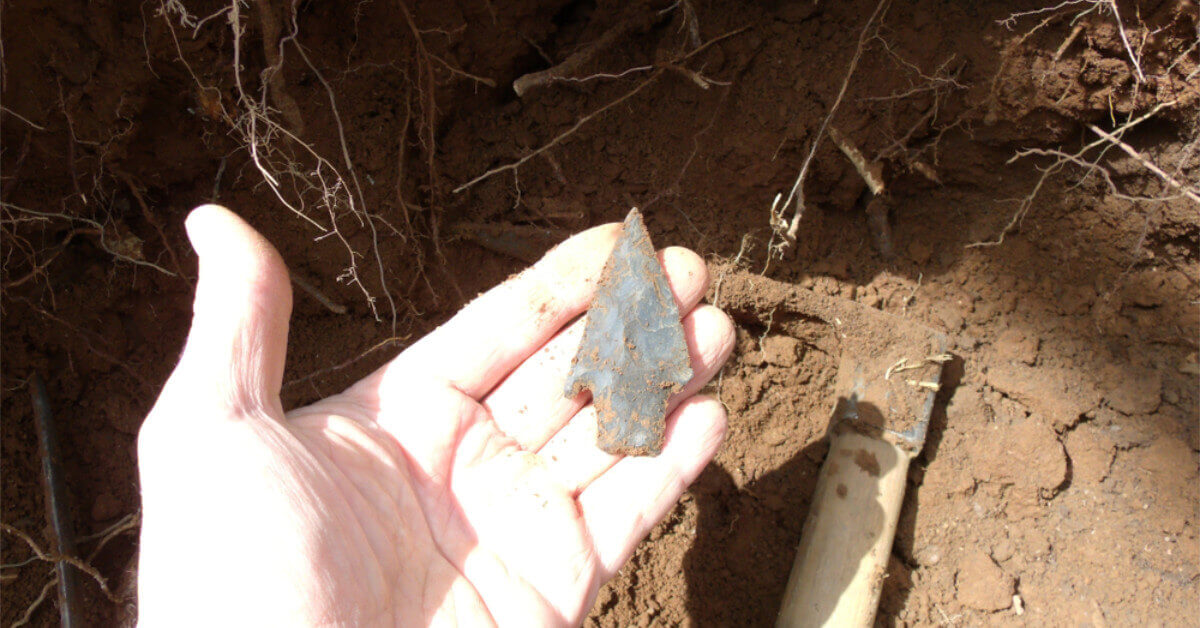 ‍Why do artifacts end up underground?

In some but not most cases, artifacts were intentionally buried. Some of the biggest archeological finds are of buried hoards of treasure that people intentionally hid long ago.

People sometimes built a town on top of the ruins of an old one. When a fire or some other disaster destroyed a town anywhere in the world, people often rebuilt it.

The new town was built on top of the ruins of the old one. Sometimes, this happened several times, as many towns have been inhabited continuously for thousands of years. When archeologists dig up a city, there are sometimes many layers, with deeper layers containing artifacts from earlier times.

Natural processes can move earth around and bury artifacts

The wind will move sand around easily, so an artifact may end up fairly deep underground over the years in a desert environment. The wind won't move dirt around as easily as sand, but water from rain and melting snow can move the earth and bury artifacts.

Water can also move arrowheads to a different location. If an arrowhead is initially at the top of a hill, rain can move it to the bottom. Eventually, the arrowhead may end up in a creek, where it will sink below the surface.

Farmers also move soil around, and this can also bury arrowheads. Farmers move soil into mounds at the edges of their fields. Sometimes an arrowhead can be buried there.

It is normal for hills and other terrain features to erode. Hills go back as far as the ice age when the ice pushed the earth around and created them. Rain and wind slowly change their shape, and this slow process may have buried some very old arrowheads.

Just as anything natural or artificial that moves the earth around can bury arrowheads, it can also reveal them. The spring is one of the best times to hunt for arrowheads. This is because rain and melting snow move the earth around and bring arrowheads to the surface.

One of the world's most famous archeological sites is the Mediterranean island of Pompeii. Back in the Roman era, a volcanic eruption killed the island's inhabitants and buried their houses.

Many archeologists have studied the site, as there are lots of relatively intact roman artifacts and rooms underneath the volcanic ash. In somewhere like Pompeii, you have to dig to find artifacts.

Not all archeological sites are buried

Many interesting archeological sites were never even hidden from the public. Some of the most famous greek and roman ruins were always on the surface; the same goes for Stonehenge, the pyramids, and countless other sites.

Other archeological sites are hidden without being buried. The thick forest hid many central and South American ruins for a long time. While local people knew about it, the famous Inca site of Machu Picchu was unknown to archeologists until the 1910s as it was hidden high on a mountaintop.

Look for arrowheads on the surface first

Looking for arrowheads on public land is usually not legal. There are federal laws against taking arrowheads from federal parks and reservations - this is theft, and they will enforce the laws.

Even picking up an arrowhead you find on the ground in a federal park can get you a fine. You may be able to take arrowheads from state land in some places, but it is usually illegal.

If you find evidence that there was previously a camp, such as stone flakes on the ground, there may be arrowheads nearby. Scan the ground carefully - an arrowhead may be on the surface, hidden under some grass or leaves. There may also be arrowheads buried under the ground - but probably not deep under it.

If you do find a significant site that seems like it must have more artifacts buried under the ground, get the owner's permission before you dig. They might get angry at you for digging holes in the ground on their land.

Arrowheads will be found in softer rather than harder ground

There will usually be a foot or two worth of soft ground followed by harder ground if you dig. Any artifacts are quite likely buried in the softer ground. Water might bury an artifact under softer ground over time, but an arrowhead is not likely to end up under the harder ground.