How Can Arrowheads Be Dated?

You can date an arrowhead by looking at the arrowhead's design or using technology to measure the date.

Sometimes, you can look at how an arrowhead was made and tell how old it is. Other times, archeological methods such as radiocarbon dating are necessary to date arrowheads. Neither method allows an archeologist to pinpoint the date, but you can get a rough idea.

Archeologists often use radiocarbon dating to date artifacts, including arrowheads. All carbon contains carbon-14, which decays over time. Therefore, an archeologist can measure how much carbon-14 is left to determine how old an object is.

While I am not an archeologist, I collect arrowheads and know how archeologists do their work and date their finds. I can recognize a very old arrowhead by looking at the craftsmanship and seeing signs that it must be prehistoric. 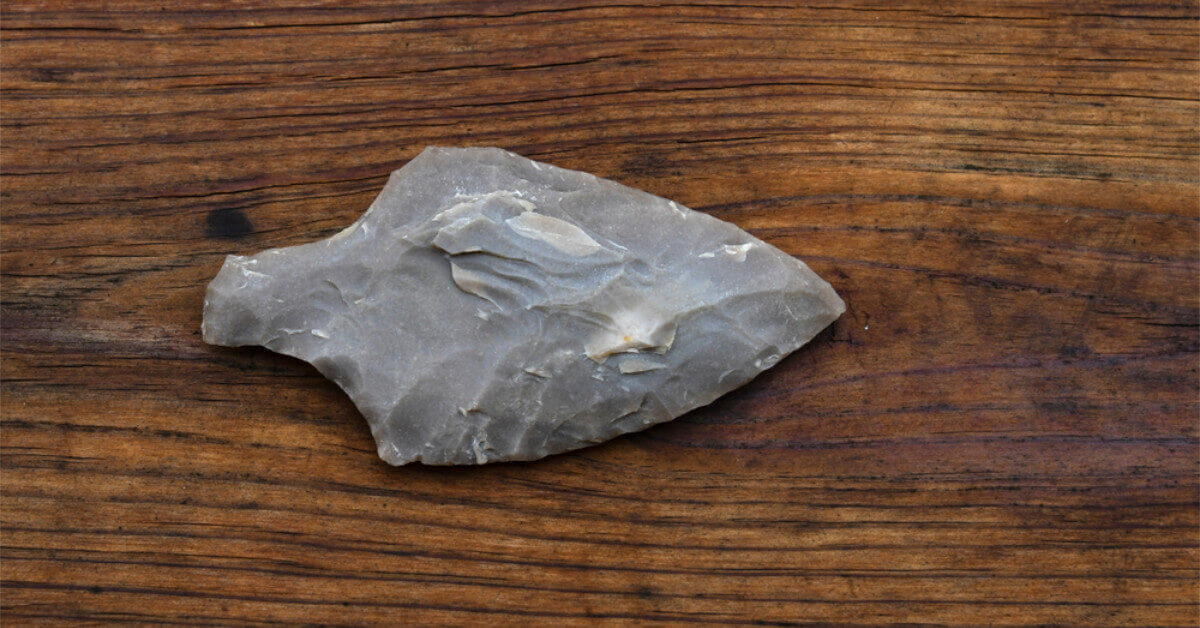 Radiocarbon dating is one of the best ways to date objects that are thousands or tens of thousands rather than millions of years old. Archeologists cannot use it to date dinosaur bones, but it works for the oldest North American artifacts.

When archeologists find an object, such as a bone, they can date it by measuring how much carbon-14 is left in it. A bone that is only 100 years old will have more carbon-14 left than one that is 1000 years old, or 10,000 years old. This is good enough to reliably, although not very precisely, date an object.

Carbon is everywhere in nature and is split into three common isotopes, carbon-12, carbon-13, and carbon-14. When cosmic rays hit the earth, they turn carbon-12 into radioactive carbon-14.

When plants grow, they absorb carbon from nature. Different plants have the same ratio of carbon-14 to carbon-12.

The ratio for plants is the same as the ratio in the atmosphere. Animals that eat plants end up with the same ratio, and so do carnivores. Two very different animals have the same ratio of carbon-14.

The type of material also doesn't matter - bone, skin, wood, bark, and so on all decay at the same rate. For this reason, carbon-14 dating is a great tool for archeologists.

It does not give you a precise date, but it is a reliable method as long as nothing goes wrong. You can use carbon dating for organic objects up to about 60,000 years old. It doesn't work for very old objects because all of the carbon 14 disappears eventually.

This technology has been around since the 1950s and has improved since then. Today, you can use only a very small amount of material to determine the date. This was not true in the early years when you sometimes had to sacrifice a large piece of an object to date it.

Many dates that archeologists believed in the first half of the twentieth century were overturned by carbon 14 dating. The estimate for how long ago the ice age ended was wrong before this technology was invented.

How is radiocarbon dating used to date arrowheads?

Arrowheads are not organic, so you cannot use carbon to date them directly. However, you can date organic material that is clearly from the same time as the arrowhead.

Sometimes, radiocarbon dating produces very strange numbers that researchers often discard as impossible to believe. If something that should only be a few hundred years old tests as thousands of years old, researchers may disregard the date.

A simpler explanation is that something went wrong during testing. Some material from a much earlier time can contaminate a sample and lead to an inaccurate date.

Are there a lot of inaccurate results when arrowheads are dated?

If nothing goes wrong, radiocarbon dates are fairly but not very accurate. For example, there might be a margin of error of 60 years for an object estimated to be 3510 years old. An object that is 11,404 years old might have a standard error of 350 years.

Only if something goes wrong during the test is there a good chance of a wildly inaccurate date. It is not quite true that the carbon 14 decay rate is the same everywhere in the world. It is somewhat different in different regions, and archeologists adjust for these differences.

How can you tell an arrowhead's age by its design?

Certain features of an arrowhead may indicate that it was from a certain time period. For example, an ice age Clovis point has distinctive grooves that give the point's age away.

By the design of an arrowhead, you can tell that it is from the paleo period, the archaic period, or the more recent woodland period. Often, an expert can tell how old an arrowhead is without using radiocarbon dating or any other method. Collectors know how to identify the oldest types of projectile points because they are the most valuable.

What other technologies do archeologists use to date artifacts?

Sometimes, an object is not old enough for a dating method to work. Single-crystal dating is inaccurate for objects less than half a million years old.

How Can Arrowheads Be Dated?