Fishing for catfish is great. They're plentiful, they fight hard, and they're sumptuous on the dinner table.

In most cases, they're willing biters and you'll easily catch them from a boat and the bank using the simplest of baits and tackle. Here's all you need to know about catfish and how to catch them.

With over 7 million catfish anglers nationwide, catfish are among the most popular fish species in the nation. Ranked only behind panfish, bass, and trout in popularity among U.S. anglers, they are a great way to spend your time out on the water. In addition to their wide distribution, potential size, fighting abilities, table-fare assets, as well as simplicity to catch, it's easy to see why they're very easy to catch.

There are several catfish species such as flathead, blue catfish, bullheads, white catfish, and the ever-popular channel catfish. Although each of these species possesses unique features, they're all catfish and inhabit various water bodies such as rivers, lakes, reservoirs, and small streams. They have incredible smell and taste abilities and are always willing biters. You can easily catch them with the simplest of baits and rigs.

Given their popularity, size, and extremely good flavor when cooked, it's important to know everything about catfish. This article, therefore, looks at everything you need to know about catfish and how to catch them.

Catfish are a diverse group of ray-finned fish that are mostly found in Asia, Africa, tropical South America, as well as various parts of North America and Europe. While they range in size and behavior, they derive their name from their protruding barbels that resemble a cat's whiskers.

Three main species of catfish found in the U.S. are channel catfish, blue catfish, and flathead catfish. Although they can be found in the same waters and hunt for the same prey, they have very different features.

Blue Catfish - This is the biggest and most prized catfish. It can grow to enormous size with the biggest ever caught weighing an astonishing 143 pounds! The best thing about blue catfish is that they're never solitary. This means that you can land a number of them and this will offer a more action-packed fishing trip.

Flathead catfish - They're solitary, which makes them hard to find and arguably the toughest to catch. They can also put up a very vicious fight when you hook them, so you'll be very happy if you are lucky to land even one. They're easy to differentiate thanks to their long bodies and square, flattened heads, and will normally max out at about 100 pounds, though some may tip the scale at 120 pounds!

Channel Catfish - Although they may not be as big as their blue and flathead cousins, channels are perhaps the most common. They generally do not top 20 pounds, which means that they're among the fastest catfish on the block.

You can easily distinguish a catfish through their smooth scale-less bodies. As the name suggests, blue catfish are usually blue and have straight, more pointed forks while flathead catfish can be easily distinguished by their square flatheads and long bodies. On the other hand, channel catfish are typically olive to light blue but this may depend on the habitat. They also have black speckles on the sides with forked tails.

As we noted earlier, catfish are also easily distinguished through their whisker-like protrusion around their mouths known as barbels. These barbels play an important role in helping them easily locate food, especially in dark waters. They also have a very keen sense of smell and taste given that they have taste buds all over the surface of their bodies.

With an average lifespan ranging between 15 and 20 years, the catfish has one of the longest lifespans of fish species.

What Regions can You Find Catfish?

While catfish can be found in most water bodies across the U.S. including rivers, lakes, reservoirs, and streams, you'll find them in plenty throughout Ohio River basins, Missouri, and Mississippi. You can also find them in North Dakota, Florida Panhandle, and Mexico. When it comes to catching channel catfish, you'll find them pretty much everywhere from east of the Rocky Mountains to Canada and Mexico.

Catfish live in freshwater habitat, especially in shallow, running waters but can also be found in saltwater. They love muddy water areas and that's why they are called "mudcat" in some areas. You'll generally find them in deep areas like river bends, deep holes, water caves, and tributaries.

To successfully catch catfish, it's important to understand their seasonal movements and behaviors. Catfish can operate both day and night. During the day, you'll find them in muddy areas along tributaries and outflows, as well as in deep structures and in covers such as tree stumps and deep weed edges.

The night, however, brings out the best in catfish. At night, catfish usually use their heightened sense of smell and taste thanks to their barbels (whiskers) and can easily locate food in the dark.

Let's look at the seasons.

Spring - Given that they typically inhabit rivers, reservoirs, and small streams, catfish usually move upstream in spring. This means that you'll most likely find them below dams and riffles, as well as in small creeks and tributaries that enter larger rivers.

Summer - You'll most likely find them in holes of streams and rivers, as well as in river stretches with weed and wood covers. You can also find them in mid-depth runs and below wing dams, as well as other structures such as barge mooring areas, logjams, and bridge abutments.

Fall - Catfish usually move to their winter holes as the water temperature cools, especially in northern regions. This means that they'll move downstream and can cover considerable distances.

Winter - Despite being very cold, catfish can be tempted to bite even during winter and can be a good target for ice fishing.

As you can see, you don't have to wait until summer to go catfishing. In essence, you can catch catfish all year round even in winter!

Catfish are typically omnivorous. They feed mostly on crawfish, insects, snails, algae, and other forms of plants. Their incredible sense of smell will guide them to food and will be attracted to foods with the strongest aroma.

Keep in mind that catfish love cover and will tend to move towards areas that provide them with some sort of cover. You'll find them around structures such as bridges, docks, rocky bottom, and downed trees. They'll also hang around channel ledges, dams, holes, flats, riprap, and creek mouths.

Catfish are also migratory species and will usually cruise up and down rivers but this may depend on species and seasons. For instance, blue catfish tend to move a lot more than flatheads, which are more lethargic and tend to establish their territories in specific areas.

What Fishing Methods to Use

When it comes to catching catfish, the most important thing to remember is that they're often located near the bottom. As such, the best way to fish for catfish is by using a slip sinker rig. This works excellently, especially in rivers, streams, and reservoirs and is easy to rig and tie.

Slip sinker Rig - You can make it by sliding the slip sinker such as an egg sinker onto the mainline before tying a bead such as a barrel swivel. Attach an 8-or-10-inch monofilament leader and then finally add the hook such as the J-style hook. This type of rig works best at the bottom or just above the floor, especially when drifting through a large area.

Float Rig - This option revolves around using a slip sinker rig but by adding a float just above the weight on the slip-sinker rig. This is perfect when fishing for catfish in wood-rich areas or over weeds. This will be of great importance if you don't want to snag. This is because the float can help the rig drift just from the water bank without snagging.

Jig Head - You can use a jig head tipped with bait to catch catfish. All you have to do is lift and drop the jig along the bottom while sporadically holding it still to tempt the catfish into biting.

You don't require loads of tackle or lures to catch catfish. Although this may depend on the type of catfish you're targeting, here are the most basic lures and tackle.

Baits - Catfish are opportunistic feeders and will feed on just about anything that can fit in their mouths. In terms of live lures, you can use live minnows, crickets, earthworms, and mealworms. You can also use home-sourced lures such as bread and butter, hot dogs, soap, bubble gums, and liver. When it comes to artificial lures, you can use artificial shads nightcrawler (for night fishing) and minnows, as well as stink baits.

Catfish Fishing Rods - We all know that using the right gear helps regardless of the type of fishing you're targeting and catfish is no different. For smaller channel catfish, you can choose a 6' medium-power rod. But for flatheads and blue catfish, you should go with a 7' medium-heavy or heavy-power rod. You should go for more length if you'll be fishing from the shore.

Reels - While a medium-duty spinning reel with a good drag can be ideal for most catfish situations, you should consider baitcasting reels that can let you cast farther if you're going for big catfish such as flatheads and blues, especially when shore fishing.

Line - Catfish are very rare in gin-clear water, so you don't need a braided line. Instead, you can choose monofilament as it's cheaper and a lot easier to use. You can use a 12-15 pound line for channel catfish and 20-30 pound line for blues and flatheads. You should also use bright-colored lines and bobbers to help you notice even the smallest of knocks on your baits.

Hooks - While treble hooks are quite synonymous with catching catfish given that they're ideal for punch or dip baits, you can consider circle hooks. Whatever hook you use, the secret is in keeping the hooks extra sharp to punch through the catfish's hard jaw.

Are they Good to Eat?

Catfish is probably one of the most delicious fish. Preparing it for dinner is also as simple as they come. Just clean it, cut them into pieces, season to taste, coat with cornmeal, and deep fry in 350&#2013265922; peanut oil. Here's a great place to start.

Catfish remains one of the most popular game fish with anglers not just in the U.S. but across the world. In addition to being readily available across most water bodies in the country, they are mostly hard-hitting and quick, which makes them a superb target.

Whether you're targeting catfish from the boat or the shore, knowing all about catfish and how to catch them will up your chances of success. Hopefully, you're better placed to give catfishing a try. Target this hard-hitting fish and you'll have endless fun out there on the water. 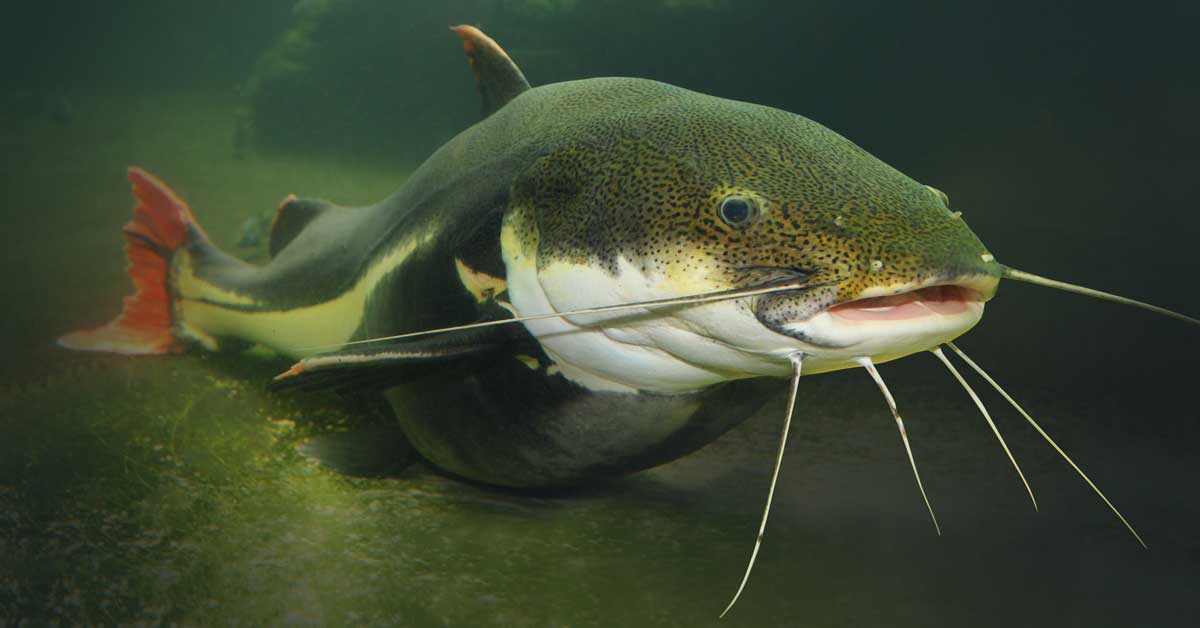