Carps aren't highly regarded as other fish species. They are widely disregarded as trash fish and nuisance species.

On the contrary, many anglers are now realizing the truth about carp as strong fighters that can be a fun challenge. Here's all about carp and how to catch them.

Carps are most probably one of the most underrated fish species in the United States. For decades, carps have been disregarded as a trash fish by generations of anglers, especially in the United States. While previous anglers considered them to be unsophisticated for the long rod, this perception is steadily changing and many anglers are now taking on them. In addition to being difficult to hook, carps fight with power and a high level of tenacity that will certainly test both your resolve and tackle. These are some of the features that have earned it the moniker "freshwater bonefish" and have confirmed that they aren't little guys like crappie or sunfish.

If you've been looking for hard-fighting fish that are challenging to catch, carp (Cyprinus carpio) is perhaps the type of fish you've been looking for. Carp may be slimy, unattractive, and invasive but many anglers love them. Known to almost exclusively feed below the surface, you'll most certainly never find them in clear mountain streams. Instead, they love muddy and brackish waters and will test the resolve and skills of even the most experienced anglers. In essence, carp are an energetic fish that's going to give you a real battle.

So if you're looking to win this battle, it only makes sense to do your research before your next fishing escapade. And even if you just want to quench your curiosity thirst about this invasive species, you may want to read on and find more about them and how to catch them.

Indigenous to Eurasia, carp were originally an important food source during the Roman Empire. They were quickly introduced to other parts of the world and made their way to North America back in the 1800s. even though they were seen as an economical food source, they were soon perceived as inedible trash fish. This is perhaps because they love muddy waters and primarily feed at the bottom, which makes them difficult to find.

Carp are omnivorous fish species that feed on both plants and animals. They are one of the hardest fish to catch and can survive in a wide range of water temperatures and have a high tolerance to polluted waters and agricultural runoff.

To be very honest, carp are not attractive to look at and this may put you off. They have very large, rubbery mouths with four barbels. Although carp do not have teeth, they have tough pharyngeal teeth that can crush just about any food item.

Carp are heavily-bodied and have incredible power that makes them one of the hard-fighting game fish. They lack scales on their heads and have pectoral fins that are more pointed in males than in females.

In terms of color, carp look like an oversized goldfish but they lack the flashy orange hue. Its body has huge scales and two of its two barbels extend from its lower lip.

How Long They Live

Carp can live for about 15-20 years but some are known to live for more than two decades.

Carp averagely measure between 15.75 and 31.5 inches long and can weigh between 6 and 15 pounds but they can get much larger. The largest ever recorded carp was caught by an angler in Bordeaux, France in 2010 and weighed a whopping 94 pounds!

What Regions They Live in

Although they are not native to North America, carp are common in many areas across North America. You can find them in the Great Lakes region, Upper Midwest, Canada, Mississippi River basin, and its tributaries including Missouri and Ohio rivers. You can also find them in various water bodies in South Dakota, Louisiana, Minnesota, Texas, and Northern Mexico.

Carp are tolerant of most conditions but generally prefer warm areas of slow or standing muddy waters. They also have vegetative areas and can live in a school of five or more. They love temperate climates and can be found mostly in freshwater. The ideal water temperature is about 73F to 86F but can also survive in frozen-over waters as long as there are some free waters below the ice. They can also tolerate low-oxygenated waters as long as they can gulp air at the surface.

From mid to late spring, the carp will begin spawning and can be almost impossible to catch them as they won't be biting. You can, however, target muddy areas of the water but you may have to wait until after spawning to get them biting.

By early summer, spawning will be over but carp will be extremely tired to even think of biting. They'll, however, start biting after a period of rest and will go on a feeding spree. The carp will become lazy by mid-summer and will sun themselves and burrow in the mud to cool down. As such, you can target them early in the morning, late in the afternoon, and at night.

Carp will become very active in early fall and will roam areas just around their summer cages. This is perhaps the best time to target carp as they'll eat anything that can fit their mouths.

Carp will generally move to shallow depths during winter months as these areas of water are somehow water. You can also target below the ice as long as there's non-iced water below the ice surface.

Even though carp are hard-fighters especially when hooked, the good news is that they do eat several foods. In other words, they are omnivorous and can feed on small insects, fish eggs, worms, crayfish, crustaceans, as well as on plants such as algae and other water plants.

You should remember that carp can eat several times a day to maintain their heavyweight. Although finding them may be difficult given that they are bottom feeders, you'll catch them if you remain patient.

Here are the best places to catch carp.

Muddy, Cloudy, Brackish, and Silt Water - You almost never find carp in clear waters of mountain streams. And even if you find them in clear waters, they'll be very spooky and almost impossible to catch. That being said, carp prefer muddy waters near shorelines or reservoirs and lakes, as well as channels of large rivers.

Warm Water - They love warm areas of the water and that's why you'll most likely find them along shorelines. So you can find them in warm waters that also support bluegill and bass.

Aquatic Vegetation - Patches of grass and weed are another prime habitat of carp. These areas are full of aquatic minnows, insects, and crustaceans, so carp will forage through and eat just about everything they can find.

You should also keep in mind that carp love areas with higher oxygen concentration, as well as in more sheltered areas.

Fishing Methods to Use

There's no fishing method that is specifically dedicated to catching carp. However, carp tend to move to weed beds when hooked, which makes them difficult to land. This means that it can take serious work, tenacity, and skills to land carp.

And despite having a good appetite and always hungry, they always take a while to make up their minds whether to bite or not. This means that making your bait move can spook them and may make them not feed at all.

Given that they're mostly bottom feeders, you should always target the bottom and position the baits in such a way that they'll be easily tempted to go for the kill. A good method, if the conditions are ideal, is to cast beyond weeds and position the bait just under the surface of the weeds. You should also make sure that your tackle isn't too obvious or else they won't feed at all.

What Lures Tackle and Baits to Use

Carp are always huge and heavy, so a 9-10 foot rod should be ideal. The rod shouldn't be too heavy or too long as this will weigh you down and tire you by the end of the day. You can use both a spinning and baitcasting rod as long as it matches perfectly with the reel and the line. Just make sure that the rod doesn't have a lot of action as this can spook the carp. The rod should also have smaller eyes to maximize your casting distance.

You can use both spinning and baitcasting reels. When using a spinning reel, go for a very easy drag system that can use a light line with about a 6-to-8 pound test for smaller carp and a 12-to-20 pound test for bigger carp. When a carp is hooked, give it the space to run and till it tires. In other words, don't put tension as this can break the line.

A baitcasting reel is great if you want to cast farther and to offer you leverage when fighting a larger carp. It also gives you the power to guide the fish away from snags.

You should also have a floater that helps you detect a bite given that carp are bottom feeders. The floater should have a bit of weight to remain stable in windy conditions or choppy waters.

A size 10 hook tied with an egg loop can be ideal for catching carp. Just make sure that you go incognito and the carp cannot notice your line or they'll be spooked and fail to bite.

You can catch carp using a wide range of baits, though some may seem strange. For instance, you can use baits such as maggots, pork meat, sweet corn, worms, maggots, dog biscuits, prawns, bread, and many more.

Are They Good to Eat?

Yes, carp are good to eat but must be prepared properly especially if you dislike its fishy flavor. It's a common part of diets in many parts of the world and is a great food source that can be prepared in many different ways. Here's a good place to start.

Your fishing experience can be elevated to the next level if you learn about the fish you're targeting before venturing out on the water. Given the level of curiosity that carp attract, especially among angler in the United States, this is a great place to start. Keep in mind that carp are invasive and hard-fighting fish that will be quite challenging even to the most experienced anglers. Hopefully, you're now in a much better place to take on the carp. 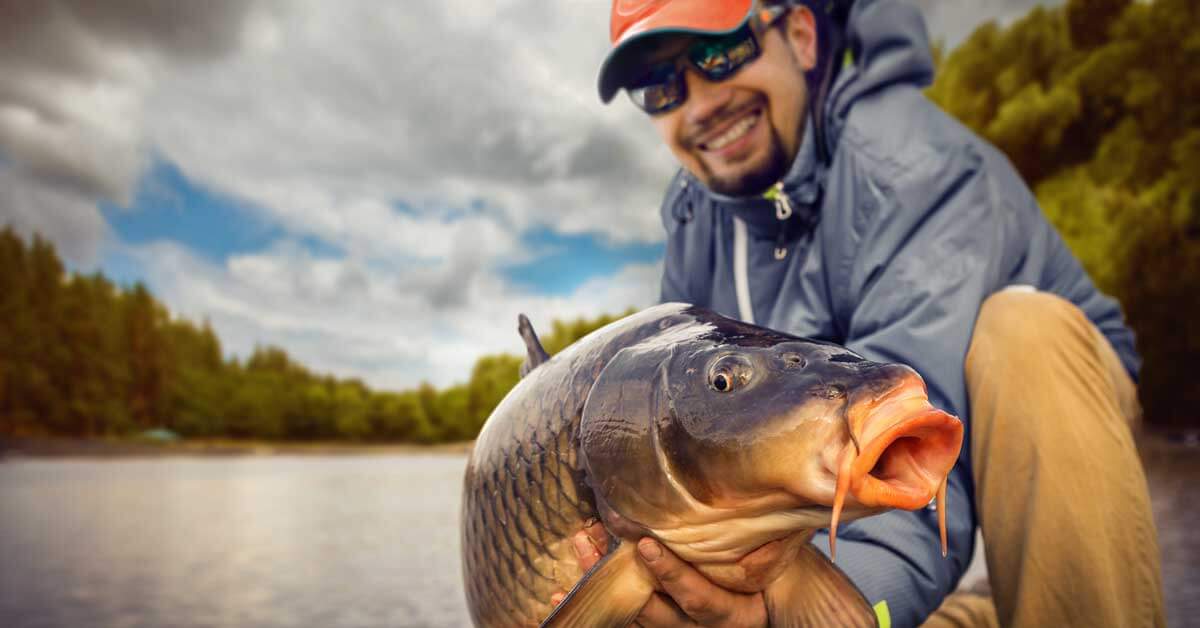