Sometimes, you can find a sharp, triangular rock in the woods and wonder whether or not it is an arrowhead. How can you tell if it is man-made?

I find/collect arrowheads and know how to categorize them and what they are worth. I also know about the techniques used to make arrowheads. I would not mistake a sharp rock for an arrowhead. 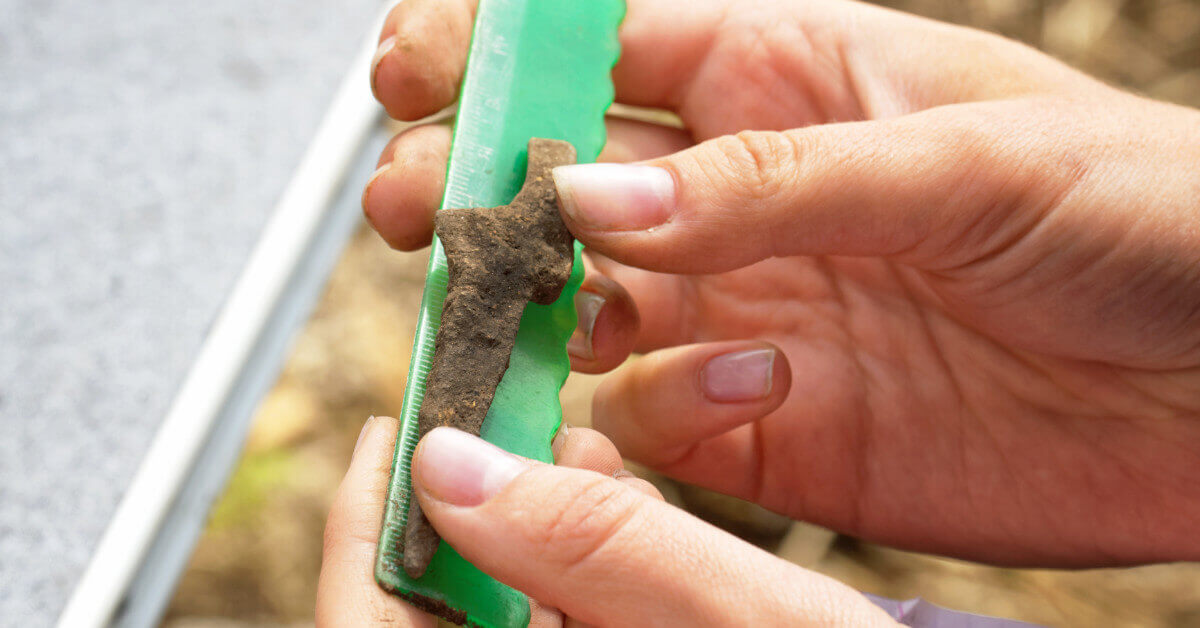 How can you tell if a sharp rock is man-made?

A naturally occurring sharp rock will not have any of the signs of craftsmanship that prove it is a stone tool. Stone tools were made by striking a rock against another to remove flakes. If a sharp rock does not have chips taken out of it, it is not an arrowhead or any other stone tool.

When archeologists found the oldest stone tools yet found in the world, they almost mistook them for naturally sharp rocks. The tools were large and seemed too heavy for the small people who lived millions of years ago.

However, a closer inspection proved that these were tools of a new type, older than any found so far. The edges had many chips taken out of them, with the chips following an obviously deliberate pattern. They could not have resulted from a rock tumbling down a hill and chipping.

While stone tools made only a few thousand years ago are very different from those that are millions of years old, you can confirm that they are real tools in the same way.

Look at some pictures of real arrowheads, especially their edges. The edge always has flakes taken out of it in a systematic way. You can always tell that it looks like the edge of a tool and not a sharp rock.

If you hold arrowheads in your hand and examine them, you can better understand what they look like than if you only look at pictures of arrowheads. However, this is probably not necessary. You can learn to tell the difference between arrowheads and sharp natural rocks by looking at pictures.

Are humans the only animals that make stone tools?

Probably, we are. While apes and even octopuses use tools, they do not make stone blades. A chimpanzee will never chip a stone into shape and use it to cut things, not even in a simple way.

Apes only make stone tools if they are taught to by humans. If humans show them how they can make tools comparable to the crude tools of millions of years ago.

How did stone tool manufacture change across the millennia?

The tools of millions or hundreds of thousands of years ago were very different from the stone tools of later times. Stone toolmaking technology gradually became more sophisticated. Early tools were crudely made and did not have handles; later tools were made precisely and attached to arrow shafts and ax handles.

Most of the developments in stone tool technology are very recent relative to how old stone tools are. Spears with stone points are older than was previously believed - up to half a million years - but tools without handles are far older.

The invention of hafting, or attaching handles to points, was one of the most important prehistoric inventions. With their stone-pointed spears, people hundreds of thousands of years ago started doing more hunting and less scavenging.

One less well-known advancement was the prepared core technique. Beginning 200,000 or 400,000 years ago, people began making tools by breaking pieces off a stone core.

This allowed people to create stone knives of predictable size and shape, which was not possible before. Knife blades of a new, much more advanced kind appeared 40,000 or 80,000 years ago. People also learned to make microliths or small, sharp blades that could work wood and make better weapons.

Another very important advancement in stone toolmaking technology was the invention of ground stone tools. Instead of producing tools only by flaking, people ground stones against each other to create a sharper edge. This was a later advancement that occurred independently in the Americas, during what archeologists call the archaic period.

Another late development in stone tool technology is the arrowhead. Bows and arrows are not nearly as ancient as spears with stone points.

There were bows and arrows as much as 61,000 years ago in South Africa. However, the bow was not a common weapon until much later. Just because it was invented that long ago does not mean that every tribe used the weapon.

There is no clear evidence for arrowheads in the early days of the settlement of the Americas. Ice age tribes in the Americas used plenty of projectile points, but these were spear and dart points, not arrowheads.

Archery appeared much later and took time to spread across the two continents. In the northwestern arctic, there were bows 5000 years ago; it took until 1700 years ago for the bow and arrow to reach as far south as Mexico.