No, arrowheads are not fossils. Not everything an archeologist finds is considered a fossil.

Arrowheads are artifacts, not fossils. Plant or animal parts that "turn to stone" and are found thousands or millions of years later are fossils. Things like clay pots, musical instruments, ax blades, and arrowheads that archeologists find are artifacts.

Anything made by a human is always an artifact and is never a fossil. Only once-living things are considered fossils. Fossils come in many different forms - not all fossils are stone.

While I am not an archeologist, I do find and collect arrowheads, and I know a fair bit about archeology. Fossils are not the same as artifacts, and fossil hunting is different from artifact hunting. 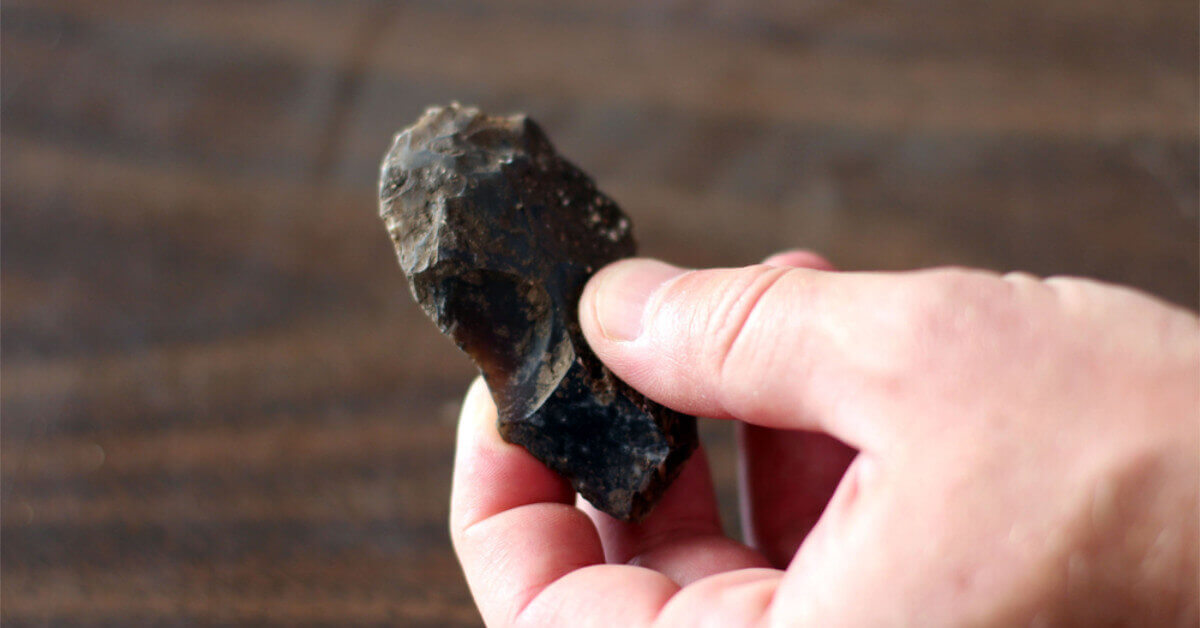 When most people hear the word "fossils," they think of dinosaur bones that turned to stone. Other remains of life from long ago are considered fossils.

For example, a plant or animal might be preserved for tens of thousands of years if frozen in ice. It will not turn to stone - the ice will prevent it from decomposing, and it will last for millennia.

These preserved animals are fossils even though they are not stone. An insect buried in amber can last for millions of years; these insects are considered fossils.

Any trace of a plant or animal from long ago is considered a fossil. For example, one might find the footprint of a lizard that walked through clay a million years ago.

The footprint is considered a fossil, even though nothing remains of the lizard. Preserved bits of animal nests are also fossils, as are animal burrows.

Fossil fuels are fossils. Coal and oil are literally fossils, as they are remains or traces of plants or animals. Dead plants and animals leave behind many other chemicals that archeologists can study.

Why do some plants or animals get preserved for thousands of years?

The vast majority of plants and animals that die do not become fossils. They turn into earth, and no trace remains of them.

Microorganisms break the dead matter down until it becomes dirt. Dead life forms are recycled and turned into soil for living plants to use.

However, these processes can be interrupted by the environment in which the plant or animal dies. Dry heat and salt can prevent the animal from breaking down, leading to mummification.

An animal can also sink into a clay bed when it dies, which can preserve the animal for even longer. Amber can preserve something for longer still, sometimes hundreds of millions of years. Fossils only form a tiny fraction of the time, but there are still plenty of fossils out there for us to find.

What are stone fossils, and how do they form?

The dinosaur bones you can see in museums are made of stone, not bone. Bones, trees, and other plant and animal parts can slowly be replaced by stone while maintaining their original shape.

Substances in water can slowly turn into stone over a long period of time. Sand, given enough time and pressure, becomes sandstone.

The weight of sand on top of other sand slowly hardens it into stone. As well as pressure, chemical reactions play a part in this slow process. Similar processes can replace a bone with a stone copy of itself.

When a bone fossilizes, it does not turn into stone so much as it is replaced by stone. The wood or bone slowly breaks down but is replaced by minerals, which harden to become stone.

Before a bone can become a fossil, it has to be preserved. If there is no clay or anything else that can preserve the bone, it will decay long before it can fossilize. If a bone does not decay, it may have time to fossilize.

A small part of the bone will dissolve, creating a pocket. The pocket will slowly fill with another mineral that hardens and becomes stone. Eventually, the bone will disappear completely and be replaced by a stone copy of itself.

What is fossil hunting?

While I look for arrowheads first and foremost, other people look for fossils. Both arrowhead hunters and fossil hunters have a chance at eventually finding something rare and valuable.

If you are really lucky, you might find the fossil of an undiscovered type of dinosaur. There are countless fossils of undiscovered animals out there to find, and sometimes amateurs rather than professional archeologists find them first.

In arrowhead hunting, you need to know where the good spots to find arrowheads are. Fossil hunting is the same - you won't have much luck picking up rocks in the woods at random. Fossils were much more likely to form in some places than others.

What laws should you know before you go fossil hunting?

The best way to hunt for either arrowheads or fossils is to look on private property with the owner's permission. If the owner gives you permission to find fossils and keep them, everything is legal.

If you take fossils from someone else's land without their permission, you can be charged with theft as well as trespassing. Any fossils or artifacts are the land owner's property unless you have permission to take what you find.